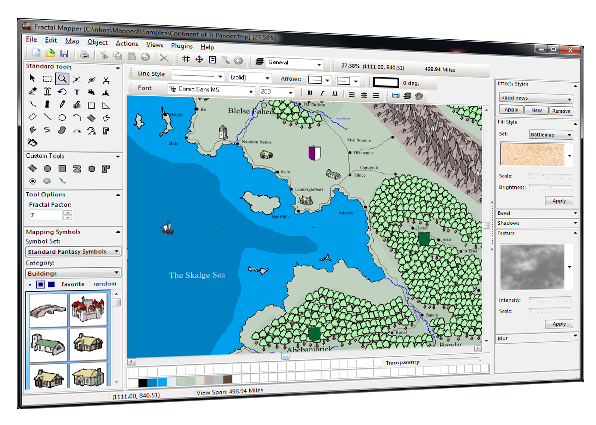 
The GoblinAPI is the scripting and plug-in interface for Fractal Mapper. With the GoblinAPI you can create plug-ins using VBScript that enhance and customize the program's functionality.

What's it used for?
With the GoblinAPI, you can create plug-ins that enhance the functionality of the program. There's several types of plugins you can create.

Feature plug-ins add functionality to the program's menus and toolbars. Your plug-in script can be called right from the menu, tool bar, or pop-up menu as if it was any other program feature. For example, you might want a plug-in that applies a certain set of special effects to selected objects when it's selected from the menu.

You can also create custom drawing tool plug-ins. These are scripts that extend the existing set of drawing tools with your own added functionality. For example, you could create a 'river' tool that might draw a line in a specific shade of blue and at specific Fractal Factor. More complex tools might include tools that place randomly generated names on a map, or align a street of buildings along a road.

Then there's File Handler plug-ins, which allow you to hook into the program's file loading process. With this type of plug-in, you can create a script that can import files in formats other than Fractal Mapper's native format, or respond to a particular file type in some way.

Event Handling
In addition to creating plug-ins, you can also respond to events that occur on your map with the GoblinAPI. Maps can be made interactive and respond to the user's actions. The GoblinAPI features the ability to define 'event handlers' within your map, such as when an object is selected or the map is first loaded. As these events occur, pre-defined script procedures can be executed. For example, in an interactive character sheet created with Fractal Mapper, you could have secondary attributes automatically calculated whenever a stat is changed. In this case, what you'd do is place procedures within the map to respond to the 'OnTextEdit' event. Or, as another example, you could have all of your map's encounter information randomly reset each time the map is opened.

How does it work?
When you execute your plug-in scripts, you are literally accessing and using the same routines used by the program. This means you are accessing the same objects in code that the program is accessing, and calling the same functions. You are directly hooked into the program and harnessing it's power within your script.

Lots of functionality built in
The GoblinAPI has a ton of functionality built in, so you won't have to re-invent the wheel. The GoblinAPI offers hundreds of functions, properties, and methods that can be used to manipulate objects on your map within scripts. Most every capability available through the normal Fractal Mapper interface to alter objects is available via the GoblinAPI. Objects on your map can be re-sized, re-shaped, rotated, mirrored, etc. In addition, fill and line colors and patterns can also be set, and fonts changed. Special effects can be applied or remove. New objects on your map can be created from scratch within scripts, or existing one's deleted. You can also create entirely new maps from scratch, load and save them to disk, and even export them to image files.

Make your own windows!
The GoblinAPI also includes a set of graphical user interface classes that allow you to create your own modal windows within your scripts. With these classes, you can create windows that accept various parameters for your scripts. A number of 'widgets' are available, including check boxes, text edits, radio button groups, sliders, and file and color selectors.

Do I have to be a programmer to use Fractal Mapper?
Certainly not! Fractal Mapper is a powerful, well-rounded graphics package. Without ever writing a line of VBScript, you can create great looking maps for your campaign! The GoblinAPI exists to offer those people comfortable writing plug-ins and scripts the ability to do so. Keep in mind, even if you don't personally write any yourself, you can still take advantage of plug-ins and scripts written by others!