Log in to your NBOS account to upload files
Rating Submitted
Rating submission failed - please try again. If the problem continues, the feature may be broken.
All Categories > Fractal Mapper > Maps > Fantasy > Overland
Jörðgarð Map of he Week No. 455 - Elmtown 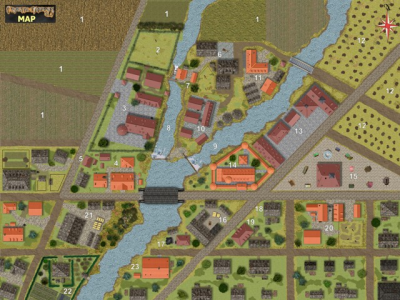 Date Added:
12/09/2020
Downloads:
155
Description:
Map of the Week No. 455 is from the forthcoming Jörðgarð Trails adventure "A Tale of 2 Books." The PCs' journey through the vampire-ruled North Kingdom continues in the village of Elmtown, a farming town. The key figures in town are the vampire brothers Baron Jarek and Squire Oldik. Jarek rules the town. Oldik owns many of its businesses.

Key to the Map of Elmtownn:

3. Baronial Castle Complex. The castle of the vampire Baron Jarek is at the south end of the complex. Behind it, to the north, is the baronial horse stable. To the north of the stable are a large woodshed, to the west, and the servants' residence, to the east. There also are three guardhouses on the property. All three are manned at all times.

6. Kamilova Complex. The horse stable and coachhouse building are on the north edge of the property. To the south of it is the corral, and on its east side are the administrative building, with a teamsters' barracks on its south side. On the property are also a small woodshed and outhouse.

7. Oldik's Mill. The mill is owned by the town's agricultural magnate, the vampire Squire Oldik. Master miller Janička, a human female artisan and spinster, operates the mill for the squire. She lives alone in a small apartment above the mill. The mill grinds grain and hammers vegetable oil. It has two waterwheels; one powers the grain mill, the other the wooden oil hammers. On the property are also a storage shed, a small woodshed and an outhouse.

10. Oldik's Distillery. The distillery also is owned by the town's agricultural magnate, the vampire Squire Oldik. The master distiller Ivánek, a human male artisan, runs the operation for the squire. The complex consists of the large distillery with a storage shed and a large woodshed to the south and three sealed, wooden storage vats on the east side of the property. .

11. Oldik's Food Packing. Another operation owned by the vampire Squire Oldik. This complex consists of a large cannery to the north, a packing plant for dry foods and root crops other than grain and flour, three storage sheds and a woodshed.

13. War Garrison. This is a special kind of garrison designed by King Vladimir to provide a large, behind-the-lines stronghold in times of war. It can handle up to 300 soldiers. At present with the kingdom at peace, Commander Radovan, a human male warrior, heads a unit of 20 soldiers. The complex consists of the headquarters building to the northeast, a large woodshed, a horse table and the barracks. The latter is closed at present. The soldiers stationed in the garrison live in quarters in the main building.

14. Oldik's Fortress. This is the base of the town's agricultural magnate, the vampire Squire Oldik, an accomplished warrior-wizard with a focus upon black necromancy. He has hired 20 mercenary warriors and a wizard as his guards. They dwell in the castle building. The guards also occupy the sole gate and the six round observation towers. The large. square tower, with a 30 x 30-foot/9 x 9-meter footprint and a height of 80 feet/24 meters, is Oldik's wizard tower. As far as anyone including his guards know, he never has left the tower since becoming a vampire.

15. Town Hall and Marketplace. This is the seat of Starosta (Burgomaster) Zdeněček, a human male merchant. Zdeněček has a relatively free hand in governing the town, but occasionally Commander Radovan will come to town hall with orders from the vampire Baron Jarek. The statue in the fountain in front of town hall is of Jarek. Peddlers can buy permits for their stands in town hall. The fee for a normal stand is 5 copper pieces daily. A large stand or Pavilion costs 1 silver piece a day.

16. Alexandr's Wagon Work. Master human male wainwright Alexandr and his journeymen and apprentices make the local area's wagons, carts, wheelbarrows and the like. The complex includes a storage shed, a woodshed and an outhouse. Alexandr lives in the town.

17. Markéta's Smithy. Master blacksmith Markéta, a human female artisan, does only normal blacksmith work. She works alone and lives alone in an apartment above the smithy.

18. Butcher Karlik. Karlik slaughters, butchers and sells all the meat raised in the local area. This complex includes the butcher sales shop, a storage shed, a woodshed and an outhouse.

19. Janek's General Store. Janek has a wide variety of goods useful to villagers but few supplies for travelers or adventurers.

20. Elmtown Slaughterhouse. This operation slaughters and packs all the pork, veal and beef raised between Timbertown and Vladimir's Throne. Most locals believe that the manager, master butcher Edík, owns the complex. Its true silent owner is the vampire Squire Oldik. The complex includes the main slaughterhouse, on its east side the business office build-ing, on its west side a large woodshed and to the south a smokehouse and an outhouse. There is a small stockyard on the southeast side of the complex for animals to graze that are awaiting slaughter. On the southwest corner is a packing house with two cellar levels for hanging freshly slaughtered meat to age for storage of smoked and packed meat. On the ground floor, storage meat is packed in barrels with salt brine.

21. Darja's Woodworks. The complex combines carpenter and joiner operations, and the owner, Darja, a human female artisan, is a master both trades.

22. Naďa's Herbal Garden. Widow Naďa and her spinster daughter, Agátka, are herbal witches. Their house is the only source of healing in Elmtown. The complex includes herbal gardens, a small fruit orchard, an outdoor oven house, a woodshed, an outhouse and a water house on the creek.

23. Igor's Clothing, Cobbler František and Adina's Boarding House. Master tailor Igor, a human male artisan, and his bachelor twin brother, master cobbler František, also a human male artisan, inherited this one-time inn and later boarding house from their parents. The building was a large inn in the early days of the kingdom. After the twins inherited the building, they remodeled the ground floor to house Igor's tailor shop in the west wing and František's cobbler shop in the east wing. Igor is the only shoemaker and František the only cobbler between Timbertown and Vladimir's Throne. The boarding house still operates on the 2nd and 3rd story, run by Adina. She takes only long-term boarders and will not house travelers.

You can get this floor plan in two versions:

1. The editable Fractal Mapper (TM) 8 version from the Jörðgarð website.