Log in to your NBOS account to upload files
Rating Submitted
Rating submission failed - please try again. If the problem continues, the feature may be broken.
All Categories > Fractal Mapper > Maps > Fantasy > Overland
Jörðgarð Map of the Week #432 - Kamilova Complex 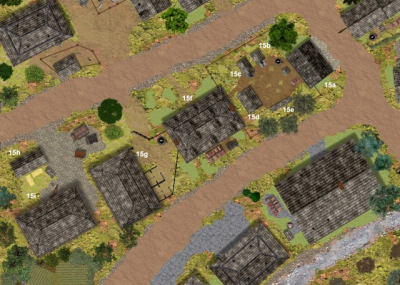 Date Added:
12/10/2019
Downloads:
458
Description:
Map of the Week No. 432 is from the forthcoming Jörðgarð Trails adventure "A Tale of 2 Books." The map is a zoom view from last week's map. It shows the Kamilova Complex (No. 15) in the village of South Clearing in the vampire-ruled North Kingdom.

Key to the Zoom Map of the Kamilova Complex:

15a. Hanička's Shop. Hanička is a member of the Kamilova family. The main business of her operation is as a pickup point for merchandise ordered from elsewhere and brought to South Clearing by the Kamilova teamsters. However, she also has a small selection of products that are consumed regularly by locals, and she is the only baker in town. The shop is open daily from 6 to 12 bells.

15b. Smokehouse. The Kamilova family uses the smokehouse to make hams and other meat products that are sold along its trade route.

15c. Baking Oven. This is where Hanička bakes her bread.

15d. Chicken Coop. The chickens and eggs are for the family's own use.

15e. Pig Pen. The pigs are bred and slaughtered for the family's own use.

15f. House of the Family Kamilova. This also is thought to be the seat of the ruling Marchioness Kamilka, who has not been seen for some time. This is a four-story building. The family has business offices and apartments for all family members on the three lower floors. The Kamilova call the fourth floor the Zámek (castle). It was the exclusive domain of the first count, Kamil, after whom the family was named, and it has continued to be the exclusive family domain. One will note that all shutters on this floor always remain open during the daytime, although some of the shutters open at times at night and light can be seen within.

15g. Slaughterhouse. All animals legally slaughtered from Timbertown to Kingsgate must be slaughtered under royal edict here.

15i. Wagon Hall. The wagons that the Kamilova teamsters use to haul merchandise are stored here. (The Kamilova lumber wagons are stored in Mýtina).

1. The Fractal Mapper (TM) 8 version in FMP format (59 MB) from the Jörðgarð website.