Log in to your NBOS account to upload files
Rating Submitted
Rating submission failed - please try again. If the problem continues, the feature may be broken.
All Categories > Fractal Mapper > Maps > Fantasy > Overland
Jörðgarð Map of the Week #431 - South Clearing 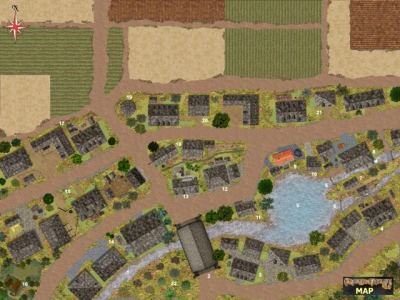 Date Added:
12/02/2019
Downloads:
438
Description:
Map of the Week No. 431 is from the forthcoming Jörðgarð Trails adventure "A Tale of 2 Books." The map shows the village of South Clearing in the vampire-ruled North Kingdom. South Clearing is mainly an agricultural settlement, but it also is home to the Kamilova, a powerful family that hasvthe

Key to the Map of South Clearing

2. Garrison Bridge. This two-story construction is a military garrison built as a bridge over Trout Creek. There is a road that runs through the garrison. Soldiers of the duchy are stationed here. This also is the control point where pass coins and papers of travelers arriving from the south are checked.

3. Danetschek's Farm. Danetschek, a human male commoner, and his family run the farm

8. Grain Mill. Owned and operated by master miller Otakar, human male artisan. He and his family have their apartment in the mill building.

11. Trout Tavern Brewhouse. The brewwife is Vlastinka, a human female artisan. She is the wife of tavernkeep Oskárek. She brews a pleasantly bitter lager which is sold only in the tavern and from wagons of the Kamilova as far as Mýtina.

12. PTrout Tavern. It is owned by the merchant Oskárek, a human male merchant. He and his wife, the brewwife Vlastinka, live in an apartment above the tavern.

13. Butcher Pepiček. Pepiček and his wife Vilma run this business.

14. Vladan's Farm. Vladan, a master artisan, his wife Terezka and their adult children run this farm. The offspring actually are the main farmers. The huge farmhouse has six modest guest rooms on the third floor. Terezka is responsible for this part of the operation. Vladan is a master cobbler. He spends most of his time making and repairing footwear.

15. The Kamilova Complex. This part of Jihjesněni will be detailed next week.

16. Herbal Witch Žofka. This is the house of a rather unpleasant herbal witch who, nonetheless, is visited by all who need medical attention.

17. Vojtišek's Farm. The commoner Vojtišek, his wife Pavlinka, her brother Vilém and their children run this family farm.

18. Radim's Textiles. This is a very mixed operation. Radim's wife, Naděnka, is a master seamstress. She makes clothing for the villagers, but she also has an arrangement with the Kamilova, under which their teamsters take measurements and orders from local customers along their trade routes and then deliver the clothing when it is finished … all for a fee, of course. Radim is a master weaver. He buys his raw materials from flax growers upstream on the and makes it into fine linen in his spinning mill. He employs two journeyman weavers. Just for security's sake and an extra income, Radim usually raises about 10 to 12 pigs, which he sells to the Kamilova for slaughter.

19. North Tower. This is one of several towers manned by ducal soldiers. It is 60 feet/18 meters high. The others are off the map to the east and west where farming roads and farmlands end. It's the job of the soldiers in the towers to check pass coins and to make sure that no one enters or leaves Ji-hjasněni without the proper pass coins.

20. Valentýn's and Pepik's Farm. The farm is owned and run by the brothers Valentýn and Pepik and their families.

21. Anna's and Tonik's Farm. The widow Anna, her son Tonik, his wife Evulka and their children own and operate this farm.

To the northeast, well upwind from the village, the Kamilova has a rendering plant and a tannery. Farms stretch on for a few miles in all the directions except the south, which is forest. There are seven towers like the North Tower to the north, east and west that control movement out of and into the farmlands.

1. The Fractal Mapper (TM) 8 version in FMP format (59 MB) from the Jörðgarð website.