Log in to your NBOS account to upload files
Rating Submitted
Rating submission failed - please try again. If the problem continues, the feature may be broken.
All Categories > Fractal Mapper > Maps > Fantasy > Overland
Jörðgarð Map of the Week #420 - Lubor's Stead 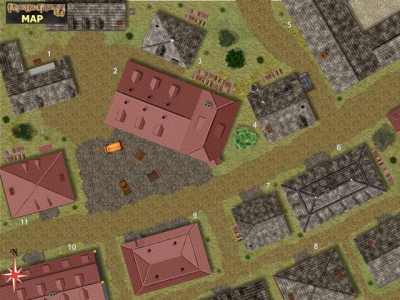 Date Added:
09/16/2019
Downloads:
462
Description:
Map of the Week No. 420 is from the forthcoming Jörðgarð Trails adventure "A Tale of 2 Books." After leaving their clandestine base in Milánek's Stead, the PCs ride on to the first "hostile" settlement in Count Arnošt's corrupt River County. They enter the village of Lubor's Stead, which is loyal to the count..

Key to the Map:

3. Lubor's Inn Stable. The stable is available only to guests of the inn. The stable fee is 3 copper pieces per night.

6. Baruška's Tavern. The tavern really is an inn, the plainer of the two in Lubors Dvůr. The owner is the 47-year-old human male merchant Baruška.

7. Baruška's Inn Stable. The stable is available only to guests of the inn. The stable fee is 3 copper pieces per night.

8. Jitunka's General Store. Jitunka, a 59-year-old merchant and widower, owns the store, which sells a wide variety of merchandise for both locals and travelers but little in equipment for adventuring parties.

10. Royal Trading Co. Warehouse. Two guards, both human male and female warriors, always are in duty in the warehouse, day and night.

You can get this floor plan in two versions:

1. The Fractal Mapper (TM) 8 version in FMP format (19 MB) from the Jörðgarð website.