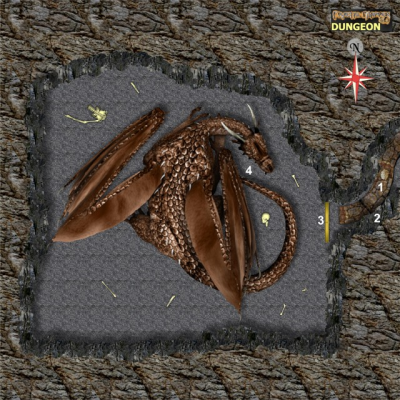 Date Added:
02/10/2019
Downloads:
421
Description:
Map of the Week No. 389 is from the forthcoming Jörðgarð Trails adventure "A Tale of 2 Books." This week we take a look at a hidden chamber leading from the second of the five caves at the dungeon entry of the Black Fortress. Last week, we saw that a second set of bronze doors was hidden behind a stack of empty, wooden crates. Adventurers will find these doors only if they look behind the crates. If they open them, they will find a descending stone stairway.

This leads to one of the two involuntarily lairs of the evil male dragon Grímúlfur. The wyrm served Martröð without ever having been bound magically into the hárdraugur's service. During the Great Wars, Martröð ordered Grímúlfur to support his troops in a battle against King Vilji's forces, a battle that went poorly for the Dark host. As it became clear that Martröð's troops would fall and that his own life probably would be forfeit, the ørmr fled the battle in full retreat.

The high draug saw to it that Grímúlfur was captured and passed sentence upon wyrm, saying that he would be assigned to duty guarding the red draug Ragnheiður's lair, a mission from which the dragon could not possibly flee. With his powerful magic, Martröð bound Grímúlfur's will to his own, forcing the wyrm into the depths of the dungeon in a great subterrane-an hall he called the Deep Lair.

However, as an extra humiliation, the hárdraugur also decided to make Grímúlfur into a trap for unwanted intruders within the higher Cave 2 complex. That is here in the High Lair. It works like this:

• Grímúlfur normally dwells in the Deep Hall, which will be described later.

• When an intruder begins descending the stairway from Cave 2 to the High Hall, Martröð's magic automatically teleports Grímúlfur into the High Hall. There he must remain until he destroys the intruders or until they flee.

• Once the intruders have been destroyed or flee, Martröð's magic automatically teleports Grímúlfur back into the Deep Hall.

Grímúlfur is a bitterly angry dragon. He wants nothing more than to flee this dungeon, but he believes that he probably will remain here instead until he dies. He sees no possibility of escape. The web of lead that encases the dungeon to block divination magic also would prevent any effort to teleport out of the dungeon.

You can get this dungeon plan in two versions:

1. The Fractal Mapper (TM) 8 version in FMP format (3 MB) from the Jörðgarð website.