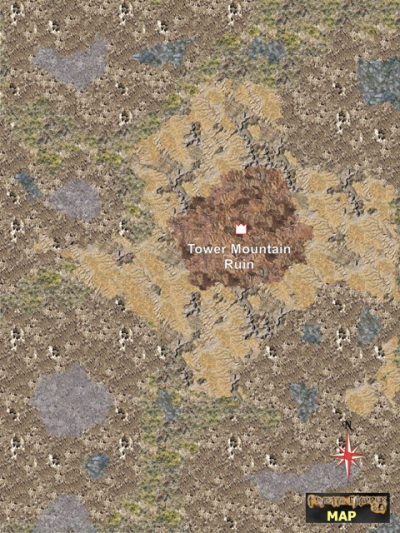 Date Added:
04/15/2018
Downloads:
678
Description:
Map of the Week No. 348 is from the forthcoming Jörðgarð Trails adventure "A Tale of 2 Books." Before the last battle of the Great Wars, the high draug Martröð enscribed his full knowledge of black necromancy into his Black Book. Martröð had a number of entrusted red draugs in his service who he did not take with him into final battle. He charged one of them, a female named Ragnheiður, with protecting the book until his return. However, Martröð was destroyed and did not return. In more modern times, the Northern Circle of druids discovered that Ragnheiður also was destroyed and that whatever destroyed her absconded with the Black Book. They assume one of Martröð's other red draugs was the thief and destroyer.

The PCs' new mission is to track down the remaining red draugs and destroy the back. The Northern Circle is having them start by going to the ruins where these red draugs laired before the final battle of the Great Wars. The first to be explored in this new advanture is the Tower Mount Fortress, which is in an area that still is mostly lifeless as a result of the devastation following Martröð's destruction. Today's Map of the Week is an overland view of the desolation where the ruins of Turn Mount Fortress can be found.