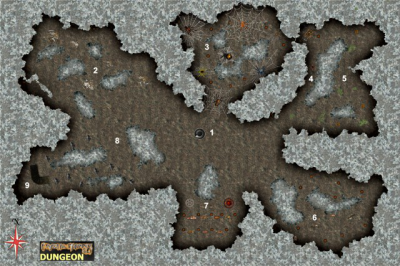 This week's map is from the Jörðgarð Trails adventure "In the Salt Mine." It shows the the second level of the demon Thren's dungeon beneath the salt mine.

Key to the Dungeon Plan

3. Spider Draug Hall. There are eight spider draugs in the hall.

4. Herder Draug Páll. Pall usually stays alone in this area, but he will move to area 3 to command or otherwise deal with his spider draugs.

5. Hall of Slimes. Seven green slimes, as shown on the map, slither back and forth over the ceiling, which varies between 20 and 25 feet/6 and 7.5 meters above the cavern floor.

6. Draug Warriors' Hall. There are 50 draug warriors (without avatars) quartered here. The area also has a weapons rack and two combat training bags hanging from yardarms. The area is lit by braziers with cold magical fires that burn constantly.

7. War Sorcerers' Hall. There are five draug war sorcerers here who spend their unending non-lives researching magical spells and such. The area includes two magical floor circles and seven workbenches. The area is lit by braziers with cold magical fires that burn constantly.

8. Hall of Golems. The nine stone golems are stationed here to keep unwanted visitors from using the stairs at area 9 to descend deeper into the dungeon.

9. Stairway to the Depths. This stairway leads to level 3.

You can get this battlemap in two versions: