Log in to your NBOS account to upload files
Rating Submitted
Rating submission failed - please try again. If the problem continues, the feature may be broken.
All Categories > Fractal Mapper > Maps > Fantasy > Overland
Jörðgarð "In the Salt Mine Released" 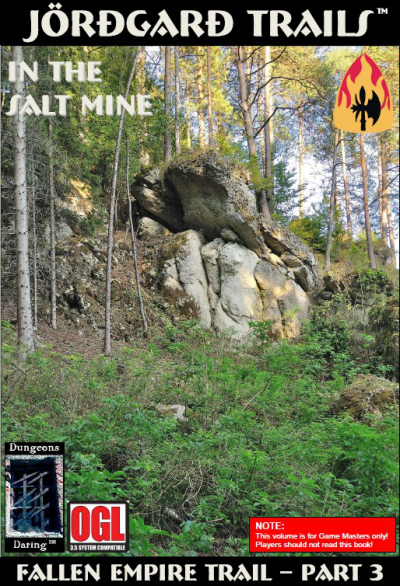 Date Added:
10/29/2017
Downloads:
562
Description:
Cartographic Relevance: Available with this adventure are 51 maps, battlemaps, floor plans and dungeon plans that have been released on an open source, open gaming basis for free commercial and personal use. Because of their open source nature, all these objects can be modified as wished by game masters.

In the Salt Mine is the 3rd chapter of the Joerdhgardh Fallen Empire Trail (TM) fantasy RPG adventure for the Dungeons Daring (C) and OGL 3.5 gaming systems. It is available free as a 396-page bookmarked PDF file. An Open Resource Document in ODT-format also is available for those who wish to copy or modify texts from the adventure. The ODT-format can be used with OpenOffice.org Writer, LibreOffice.org Writer and modern versions of Microsoft Word.

In this adventure, the PC group continues working in the ruins of the AEsir Empire as agents of the druidic Northern Circle. They are sent out to look for a lost salt mine that was used by the AEsir but that now also is being sought by orcs in the service of a powerful draug (undead) count and by thousands of rival orcs from the distant north that are led by a mysterious female orc. In addition, strange salt golems appear to be defending the area where the mine was believed to be. Both the undead count and the rival orcs want very much to find the abandoned and lost mine. The druids of the Northern Circle would like to know what's behind all of this.

The PCs find the mine, but they also find that there are two more heretofore unknown and evil dungeons beneath it that are much more important and threatening than the mine itself. Finally, they discover that there also is a secret, fortified, subterranean dwarven gemstone mine nearby.

Fractal Mapper 8 is necessary to modify the 51 maps in their native format.

The Vintyri (TM) Project is a non-profit open source, open gaming organization. All our products are free. We neither solicit nor accept donations. We do no kickstarters. We sell nothing.

For more information, go to: www.vintyri.org