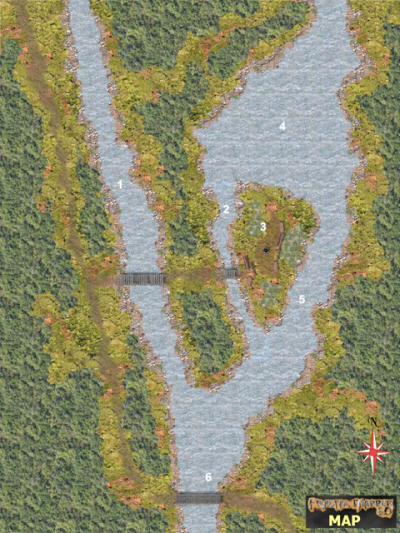 The Æsir named the old town after the two short rivers that flow down from higher forest and meet where the timber, lumber and wood center stood. They called the rivers the Left Arm and the Right Arm. The two rivers meet at the site of Two Rivers, forming the Green Arm, which in turn flows into the Greenwash, a tributary of the great River Storming. The Æsir widened the Green Arm north of the confluence, built a dam on the river and cut a channel between the two streams to serve as a mill race which turned the waterwheel of Two Rivers' great sawmill. All of these things have vanished. All that remains of them is the water and the artificial island where the sawmill once stood. That island has become a popular camping location for various kinds of creatures passing through the area. Previous visitors have built wooden bridges across the Green Arm, the Left Arm and the old millstream. The bridges are rickety, but they still appear to be serviceable. On the island are the remnants of a campfire and several large piles of fallen timber which appear to have been intended as makeshift defense walls. A few arrows that look to be of orc manufacture stick in the wood.

Key to the Map:

3. Former Mill Island with remains of a campfire and timber piles