Log in to your NBOS account to upload files
Rating Submitted
Rating submission failed - please try again. If the problem continues, the feature may be broken.
All Categories > Fractal Mapper > Maps > Fantasy > Overland
Jörðgarð Map of the Week #292 - Treefall Ruins 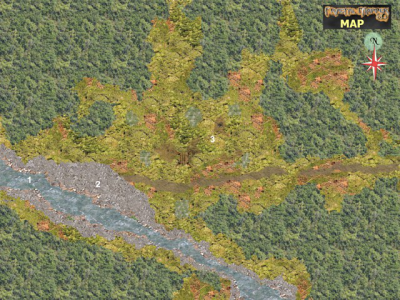 The corner of the Greenwood northeast of the Greenflow was very sparsely settled in the time of the Æsir Empire. The population was limited almost exclusively to loggers, sawyers, carpenters, joiners and those who lived from the wood trade. Treefall was the smaller of the two. It was a logging center where felled timber was placed in the Greenflow. Steered by raftsmen, it was floated downstream to the confluence of the River Greenflow with the Hríð, where it was processed in the sawmill in a village of which nothing remains. It burned to the ground during the wars. The minions of the Darkness still are rare in the ruins of Treefall. When orcs are found where Treefall once stood, they tend to be bands that descended from earlier orcs that once were bound to Dark masters who fell in the wars. The current generation is bound to no one. Occasionally, such bands also have an ogre scout among them.