Log in to your NBOS account to upload files
Rating Submitted
Rating submission failed - please try again. If the problem continues, the feature may be broken.
All Categories > Fractal Mapper > Maps > Fantasy > Overland
Jörðgarð Map of the Week - #66 - Sentinel City 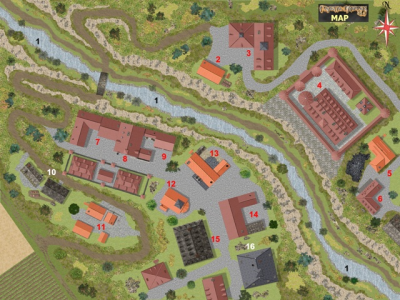 Date Added:
06/11/2012
Downloads:
1258
Description:
With the 66th Map of the Week we continue in the land of Slovania, a corner of the fallen Æsir Empire that is not ruled by forces of evil but that is not necessarily good aligned either. Slovania was settled by a high shamann from Windland in the south who was named Aleksandra. Her witch faith was dominant in the formative years but since has lost much of its influence.

Today, Slovania is a weak kingdom with four strong counties and a march. The king has his seat in Newhouse. The four counts and the margrave combined have considerably more power than the king alone. However, they work against one another rather than together. Their lands are the Royal, River, Grainland and Southland Counties and the Border March.

Slovania is a relatively corrupt land between the borders of good and evil. However, evil agents serving the dark draugs in the ruins of the Æsir Empire to the north are beginning to establish secret bases in parts of the kingdom.

Today's map shows us Sentinel City, a Slovanian town on the border of the draug lands in the fallen Æsir Empire.

Key to the Map of Sentinel City

2. High Tavern. This is the favorite watering hole of the artisans on the northeastern hill and caravan riders from the Royal Trading Co. (Location No. 3). The tavernkeep, owner and only employee is the 48-year-old Ivana, a human female merchant. The tavern serves no food and no drinks other than World's End ale, which costs 3 copper pieces per pint/half-liter tankard.

3. Royal Trading Co. The complex consists of the square coach house and stable, on the west or left side, and the combined administrative building and warehouse. The head of the trading company's branch office in Sentinel City is the deep devil Izakar in disguise as the 55-year-old human merchant Přemysl. Izakar is a servant of the devil Gadreel in Newhouse. Přemysl-Izakar employs two clerks, human male and female merchants, and three laborers, human male and female commoners. There usually are six to 12 caravan companies in town at any given time. Each caravan rides with a company of six human male and female warriors.

7. World's End Inn. Some taverns in the southern part of the village (beyond the map's borders) have a few guest rooms, but the World's End is the only true inn in Sentinel City. It is owned and operated by Innkeeper Lumir, a 49-year-old human male merchant. The southwestern wing of the inn has 12 single rooms at five bronze pieces per night and four doubles at five bronze pieces per person. The northern wing houses the kitchen on the ground floor and the apartment of Lumir and his family on the second story. The eastern wing has public rooms on the ground floor and the second story. The upper level is opened only when business warrants it. Lumir sells his own house ale at three copper pieces per pint/half-liter tankard, spirits from the Newhouse distillery at 1 to 7 bronze pieces per shot/0.1 liter glass and meals from 1 silver piece to 8 bronze pieces. Lumir's wife, Ester, a 46-year-old human female artisan, is the alewife. His daughter, the unmarried Darja, a 28-year-old human female artisan, is the master cook. Lumir employs two chambermaids, two waitresses and a laborer, all human male and female commoners.

8. World's End Brewery. Lumir's wife, Ester, a 46-year-old human female artisan, is the alewife. She brews a light, top-fermented ale. On brewing days, she has the services of Lumir's laborer.

10. Adam's Tavern. The 66-year-old tavernkeep Adam and his 59-year-old wife and brewmistress, Eva, run this tavern that locals shun. The tavern actually is owned and financed by the Northern Circle. Some in Sentinel City may suspect it, but no one in the village knows this. The tavern's only real purpose is to serve as a way station for members of the circle, who are feared by villagers, on their travels between Óðinn's House and the Æsir ruins in the north. The only people who do business in the tavern are members of the circle and occasional adventurers who follow mostly ill-advised tips to go there. Members of the circle who stop there are fed and given drink by Adam and Eva at no charge. That's what the circle pays them to do. If outsiders enter the tavern and manage to stay there long enough to place an order, Adam will serve them the house lager at 6 copper pieces per quart/liter tankard. He will not sell them food. Members of the Northern Circle seek no company from adventurers who may wander into the house. A PC group is more likely to get thrown out than to get information. Members of the circle who pass through town sleep in beds in the open bay barracks-style loft above the brewery, the northwestern building. On the lower level, Eva makes her own barley malt and brews the lager that locals call Æsir pivo (Æsir beer). Most villagers prefer it to World's End ale, despite the fact that it comes from the unpopular Adam and Eva.

11. North Garrison. The 39-year-old human male warrior Ivo commands the 75 soldiers stationed here, most of them human male and female warriors and scouts. The only exceptions are two human male and female war wizards. The western building is the main barracks. The center structure is the stable. The eastern building is the unit's headquarters with officers' housing on the second story. In addition to the garrison, there also are soldiers stationed in two large watch towers in the southern part of the city where the land is the highest. These areas are beyond the map's borders. At any given time, about 30 of the garrison's soldiers and one war wizard will be out of town riding patrol.

12. Southhill Windmill. Master Miller Kyido, a 55-year-old human male artisan, makes Sentinel City's flour, feed and vegetable oil. The usually steady winds atop the Southhill make it possible for the mill to run on most days when grain is brought in. The main grains harvested near Sentinel City are spelt, emmer wheat, oats, rye and barley. When farmers bring in grain, Kyido charges them a 10% milling fee by weight. The other 90% of milled flour and feed goes to the farmer. Kyido's 52-year-old wife, Květoslava, a human female commoner, and his 30-year-old son, Zbyněk, a journeyman miller and human male artisan, also work in the mill. In addition, Kyido employs an apprentice and a laborer, both human male commoners.

13. Temple of Fire. The temple honors the Aleksandreska fire spirit, Svarožič. It does not have a great following. Much of the time, Ada, an 81-year-old human female cleric of Svarožič, is the only person in the temple. There once were five clerics serving Svarožič here, but Ada is the only one who remains. However, she does have full clerical abilities and will heal in return for payment.

16. Dagmar's General Store. Most kinds of merchandise can be found in this three-story emporium. The owner, Dagmar, a 34-year-old human female merchant-warrior, is one of the few villagers in Sentinel City who likes and gets along well with the members of the Northern Circle who pass through town. She also is the only villager who is welcome in Adam's Tavern (Location No. 10). The members of the Northern Circle are good customers who bring valuable old gold pieces of the fallen Æsir Empire to her. But more than that, the circle members strike a chord within Dagmar. If they were to invite her, Dagmar would drop everything in Sentinel City to join them as a member of the circle in the ruins of the fallen empire. However, no such invitation ever has been issued. It also is unlikely that one is forthcoming. In Sentinel City, Dagmar employs a bookkeeper, human female merchant; six salespersons, human male and female commoners, and a laborer, human male commoner.

You can get this in two versions:

Next: The Town of Óðinn's House