Log in to your NBOS account to upload files
Rating Submitted
Rating submission failed - please try again. If the problem continues, the feature may be broken.
All Categories > Fractal Mapper > Maps > Fantasy > Overland
Jörðgarð Map of the Week - #64 - Slovania 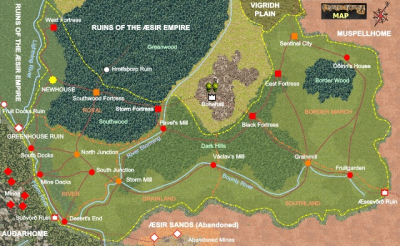 Date Added:
05/28/2012
Downloads:
1184
Description:
The 64th Map of the Week brings us to the land of Slovania, a corner of the fallen Æsir Empire that is not ruled by forces of evil but that is not necessarily good aligned either. Slovania was settled by a high shamann from Windland in the south who was named Aleksandra. Her witch faith was dominant in the formative years but since has lost much of its influence.

Today, Slovania is a weak kingdom with four strong counties and a march. The king has his seat in Newhouse. The four counts and the margrave combined have considerably more power than the king alone. However, they work against one another rather than together. Their lands are the Royal, River, Grainland and Southland Counties and the Border March.

Slovania is a relatively corrupt land between the borders of good and evil. However, evil agents serving the dark draugs in the ruins of the Æsir Empire to the north are beginning to establish secret bases in parts of the kingdom.

The map above is reduced in size. You can get the full-sized map in two versions:

Next: Slovania's royal seat of Newhouse.