Log in to your NBOS account to upload files
Rating Submitted
Rating submission failed - please try again. If the problem continues, the feature may be broken.
All Categories > Fractal Mapper > Maps > Fantasy > Overland
Jörðgarð Map of the Week - #63 - Westgate 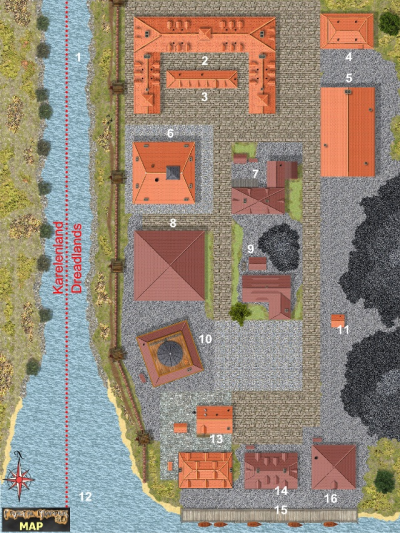 Date Added:
05/21/2012
Downloads:
1238
Description:
The 63rd Map of the Week gives us our last look at the Dreadlands. This map of the coastal town of Westgate is from our pending campaign setting release "The Northwest."

Key to the Map of Westgate

2. Military Garrison. Both the regular army of the march and the border patrol have their headquarters here. The patrol consists of 48 orc warriors, two orc warrior officers, five ogre spies and 10 human officers. The regular army consists of four platoons of 20 orc warriors each, 20 orc warrior officers, 116 human warriors, four human war wizards and 20 human warrior officers. The forces are about evenly divided between males and females. Magnús, a human male warrior, has the overall command. He is subordinate only to Baroness Dagný. Kristjana, human female wizard, commands the four war wizards but is under Magnús. Jóhannes, a human male scout, is the border patrol commander. He also is under Magnús. Órkheðinn, commander of the orc host, dwells in the orc compound along the river on the north edge of town.

6. Baroness Dagný's Castle. The baroness and her adjutant Oddi, a human male warrior, dwell in the small castle. The first and second floor have windows. The barony's governmental administration is on the ground floor. Oddi's quarters are on the second story. The draug baroness dwells on the third and fourth stories.

10. Westsea Windmill. This rather sizeable operation belongs to the duchy, is under the wardship of the marchioness and is run by Baroness Dagný. Her manager is Master Miller Angantýr, a human male artisan. The mill was built after the war on the orders of Duke þráinn, who wanted to close the old conventional waterwheel-powered mill that diverted water from the border river Fearsome in order to seal the border within the town. Once the windmill was in operation, þráinn ordered the marchioness and the baroness to see to it that the old mill was town down and that the mill pond and millstream were filled. The windmill grounds and presses all of the grain and oil seed harvested by the regional serf farms. It makes flour, vegetable oil and feed. Angantýr employs three journeyman millers, all human male and female artisans; three apprentices, human male and female commoners, and three laborers, also human male and female commoners.

13. Saltbreeze Tavern). Tavernkeeper Hákon, a human male merchant, owns the Saltvind. His wife, Ásdís, a human female artisan, is the alewife. In the brewhouse on the north side of the tavern, she brews the tavern's only drink, a light top fermented ale. The tavern once was the public room of the old Saltbreeze Inn Complex, but the inn went out of business after the wars. Hákon serves no food, only ale, at 3 copper pieces per pint/half-liter tankard. He also keeps his ears open at all times to fulfill his duties as the local spy of the Northern Circle.

14. Fishermen's Guildhouse. All those who wish to leave shore and fish must be registered members of the guild. The guildmaster is Símon, a human male commoner and fisherman. The guildhouse has business offices, a taproom for members and Símon's quarters. The taproom serves ale from the Saltbreeze brewhouse at 5 copper pieces per quart/liter tankard. Símon no longer fishes. He works full time as guildmaster, and he also serves the ale in the taproom. Earlier, this building was the guesthouse of the defunct Saltbreeze Inn.

15. Fishermen's Dock. This area always is guarded by two orc warriors. Only fishermen who are guild members are allowed on the dock.

16. Fishermen's Guild Packing Plant. Fishmaster Skarpheðinn, a human male artisan, runs this operation, which packs the commercial catch of the guild for shipping. Some of the catch is packed in barrels with salt brine. The rest is smoked. Skarpheðinn employs four laborers, all human male and female commoners. Earlier, this building was the stable of the defunct Saltbreeze Inn.

Next: The land of Slovania.