Log in to your NBOS account to upload files
Rating Submitted
Rating submission failed - please try again. If the problem continues, the feature may be broken.
All Categories > Fractal Mapper > Maps > Fantasy > Overland
Jörðgarð Map of the Week - #62 - Elven Meadow 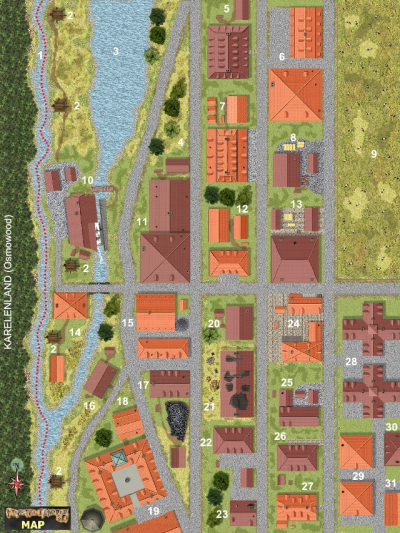 Date Added:
05/13/2012
Downloads:
1177
Description:
This week we're still in the Dreadlands in the town of Elven Meadow. The map is from our pending campaign setting release "The Northwest."

Its special role within the restricted zone becomes quickly clear to a new visitor. Small groups of orc warriors with vicious dogs patrol the east bank of the River Fearsome 24 hours a day. Wooden watchtowers stand on the east bank every 150 to 250 feet/240 to 400 m. In them are sharpshooter military archers. Officially, the patrols, dogs and watchtowers are there to keep elven intruders from entering the duchy. However, everyone in Elven Meadow knows the real reasons that they're there. Their mission is to stop townsfolk from escaping the duchy and march by swimming across the River Fearsome and vanishing in Kareli Osmowood.

The middle of the River Fearsome is the western boundary of the Dreadlands. Beyond it lies mysterious Karelenland, where light elves still rule and still dwell in the Dimension of Life. For reasons explained in the Karelenland section of this book (Volume III), the Dreadlanders never see elves or anyone else on the opposite bank of the River Fearsome, but they know and can feel that they always are being observed.

farming is the main business in Elven Meadow. The trading coster is another important business. A wood industry is missing, however. An endless resource of timber is in sight but completely beyond reach … Osmowood in Karelenland across the river. Unfortunately for Elven Meadow, the town is on the east bank of the river, where the meadowlands begin. Lumber must be brought to town from Underhill, 170 miles/210 km to the east.

As a result, all buildings in town are made of stone from the banks of the River Fearsome. The roofs are of clay tiles, but these too must be brought in from the kiln in Underhill. There are two businesses that do import substantial lumber from Underhill, however. One is the relatively small operation of Master Wainwright Tumi, who makes and repairs wagons and carts for locals and for the serf farms and the military. The other is Master Cooper Ingi, who makes the barrels in which agricultural goods including the brine-preserved fish of Westgate are packed.

2. Border Watchtowers. Each of these are occupied by three male and female human and orc warriors who are sharpshooter archers. Their main duty is to slay anyone who attempts to escape the duchy by swimming across the river.

3. Mill Pond. The River Fearsome is dammed north of the map's border to form the pond.

4. Former Market Square. With all the farmers having been made serfs and the lack of peddlars, the market simply went out of business and became overgrown with weeds and low brush.

6. Two Rivers Trading Coster. This operation belongs to the marchioness. It consists of a headquarters building and a warehouse. The director of the company, who runs it for the marchioness is Védís, a human female merchant-spy. Locally, she employs two clerks, human male and female merchants; a warehouse manager, a human male merchant, and five laborers, human male and female commoners. Covertly, Védís is the head of spying operations for the Northern Circle in the Dreadlands. One of her clerks and her warehouse manager also are in the spy ring. In service outside of Elven Meadow are six caravan leaders, all human males and females of varying professions.  All of them are agents of the spying ring. Other traveling employees are 30 caravan workers, all human male and female warriors or scouts. Six of them are members of the spy ring.

8. Tumi's Wagons. This relatively small operation is owned and operated by Master Wainwright Tumi, a human male artisan. He emplys a journeyman wainwright, a human female artisan, and an apprentice, a human female commoner. The shop makes and repairs wagons and carts.

11. Town Granary and Storehouse. Baron Hjálmtýr is responsible for the granary. The 15% of the harvest collected as a tithe is stored here. The contents of the granary are used as payment for services including the costs of maintaining the military. The remainder serves as rations for times of emergency.

12. Hulda's General Store. Hulda, a human female merchant, sells produce from the serf farms and storage products purchased from the granary as well as most non-food items that would classify as serving basic needs. She employs two salespersons and two laborers, all human male and female commoners.

14. Border Patrol Headquarters and Kennel. Kjartan, a human male scout, is the commander of the patrol. He has 25 male and female orc warriors, five male and female ogre scouts and 10 male and female human warriors under his command. The ogres and orcs live in the orc camps on the edges of town. The humans live on the third and fourth stories of the four-story headquarters building. Kjartan lives on the second story. Eight vicious German shepherds and Doberman Pinschers are kept in the kennel, the building on the south end of the complex.

15. Baron Hjálmtýr's Mansion. The baron's modest castle also houses the small regional government. Directly south of the castle is the baronial stable and coachhouse. Hjálmtýr is a male intermediate draug merchant. He has no avatar. As a result, the baron is seen only outside of daylight hours. His governing function is somewhat limited. All matters of policy are decided by the Marchioness Dagrún or Duke þráinn. Hjálmtýr is more an administrator than a ruler. He sees to it that Elven Meadow runs smoothly on a day-to-day basis. His administration includes his adjutant Arinbjörn, a human male warrior who is the public face and voice of the barony; for clerks, all human male and female merchants, and three laborers, all human male and female commoners.

16. Arinbjörn's House. The adjutant of Baron Hjálmtýr, the human male warrior Arinbjörn, dwells here. Arinbjörn has neither wife nor family, but he does have two servants living with him in the house, his manservant Friðgeir, a human male scholar, and his cook, Guðbjörg, a human female artisan. Houseservants, human male and female commoners, also work in the house but live outside of it.

19. Garrison. Kristbjörg, human female warrior who serves as Elven Meadow's military commander, has 150 human soldiers, 150 orc warriors and five ogre scouts in her unit, which includes the subordinate border patrol. The 140 human warriors who are not in the border patrol are based in the garrison. The 125 orc warriors that are not in the border patrol are stationed in camps at the northern and southern ends of town. The compound also includes a lead-roofed war wizards' tower that is under Kristbjörg's command. Olöf, a human female wizard, is the leader of the three human male and female war wizards.

20. Two Rivers Trading Coster Guesthouse. This building once was the stable of the Fearsome Inn. After the inn closed, Two Rivers bought it and remodeled it as a house to accomodate members of its caravans who are temporarily in town. The guesthouse has two permanent employees, housemaid Katrín, a human female commoner, and cook Jósteinn, a human male artisan.

21. Fearsome Inn Ruin. The Slíð Gistihús once was one of the fanciest inns in the North Duchy of the Æsir Empire. In its heyday, the inn was at the hub of trade, on the road connecting the port of Westgate with Underhill and Arnarhöfn. After the wars, when Kareli vessels began their blockade of Westgate, the importance of the trade route diminished and the inn's business was vanished. The inn closed and remained closed for many years, with the building slowly becoming decrepit. A lightning strike 12 years ago set the building ablaze. It and neighboring structures doubtless would have burned to the ground if the thunderstorm had not been followed by a long, torrential rain that doused the fire in the abandoned inn.

22. Fearsome Tavern. In olden times, the tavern was the public house of the Fearsome Inn (Location No. 21). Today it's a scurvy beer tavern that draws all but the upper levels of life in Elven Meadow. The tavern was purchased 10 years ago by Oddgeir, a human male merchant who is an agent of Védís' Northern Circle spy ring. Only two things are served in the tavern: The house lager beer, which costs three copper pieces per pint/half liter tankard, and a breadboard with cold cuts, rye bread and dill pickle at two bronze pieces.

23. Fearsome Tavern Brewhouse. The brewhouse belongs to the tavern. The brewwife is Oddgeir's wife, Guðlaug, a human female artisan.

Residentials: Housing for the freemen is in the upper stories of several town center buildings and also in the areas directly north and south of the map.

Orc Camps: The orc warriors who serve in the military and border patrol live in camps on the outer edges of town, beyond the north and south residential areas. Bergur, commander of the orc host, has his housing in the northern camp, which is located by the dam on the River Fearsome that channels off the millstream. The string of watchtowers (Map Locations No. 2) ends at the orc camps. There are 75 orcs based in each of the two camps.

Next: A last look at the Dreadlands - The coastal town of Westgate.