Log in to your NBOS account to upload files
Rating Submitted
Rating submission failed - please try again. If the problem continues, the feature may be broken.
All Categories > Fractal Mapper > Maps > Fantasy > Overland
Jörðgarð Map of the Week - #61 - Treeherders Shadow 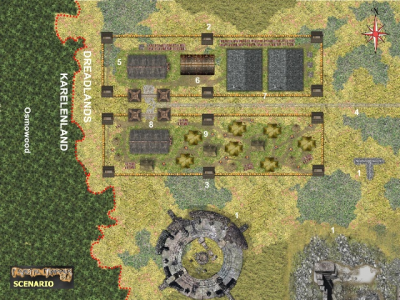 Date Added:
05/03/2012
Downloads:
1213
Description:
We've been warned by Telekom that a substantial renovation of the local telephone system may result in frequent and lengthy interruption of DSL servive over the next seven days, beginning tomorrow, so we're posting Monday's map of the week ahead of time. We continue in the Dreadlands, at the military outpost in the ruins of Treeherders Shadow. The 61st Map of the Week is from the pending Jörðgarð (TM) campaign setting release "The Northwest."

Treeherders Shadow is considered to be the worst duty station that a soldier of the undead Duke þráinn's host can get. This appraisal is not based upon evil experiences. To date, the elves of Karelenland have lifted no finger against þráinn and his folk. Nonetheless, the soldiers in Treeherders Shadow constantly labor under the clear belief and feeling that they are under an elven magnifying glass, and that the elves may press their thumbs down upon them at any minute.

Having duty in Treeherders Shadow keeps a soldier under constant fright and pressure. That is true of both orcs and humans. No one in the outpost who has looked beyond the border into the darkness of Kareli Osmowood ever has seen an elf, not even a sign or trace of one. Nonetheless, every human stationed in the outpost feels that he or she is constantly being watched by elves within the wood.

The humans and orcs stationed in Treeherders Shadow do their best not to look upon Osmowood. They sense not only elven eyes upon them but also the presence of elves who mean them no good. Not a single human or orc is stationed in Treeherders Shadow who would not prefer to be somewhere else far away from the invisible but preying elven eyes that they believe are upon them.

Key to the Map of Treeherder's Shadow

1. Ruins of the Ganndar Elves. The elves are not a destructive folk. When the left the lands east of Osmowood and the River Fearsome, they did not destroy those things that they had abandoned. In earlier times when þráinn encountered the treeherder Stórblað on this site, an elven tower and a few buildings stood there, still in good condition. However, þráinn and his followers feared things elven. They did not claim these structures, nor did they maintain them. Thus, the tooth of time eventually gnawed them into ruins.

2. The Human Compound. The humans and orcs stationed in Treeherders Shadow are a single unit, but as elsewhere in the Dreadlands, each folk has its own compounds. Experience has shown that when orcs and humans are placed together in a single compound, bloodshed soon follows.

4. The Road to Nárgl's Mill and Elven Meadow.

8. Orc Headquarters. Steinólfur, commander of the orc host has his headquarters here. Steinólfur is subordinate to the overall commander, the human Njáll (location No. 5).

9. Orc Camp. Only seldom do orcs build things, and then only when it is necessary or when they have no choice. The orcs of Treeherders Shadow all camp outdoors in tents.

You can get the map in two versions:

Next: The Dreadlands - Elven Meadow.