Log in to your NBOS account to upload files
Rating Submitted
Rating submission failed - please try again. If the problem continues, the feature may be broken.
All Categories > Fractal Mapper > Maps > Fantasy > Overland
Jörðgarð Map of the Week - #59 - Nárgl's Mill 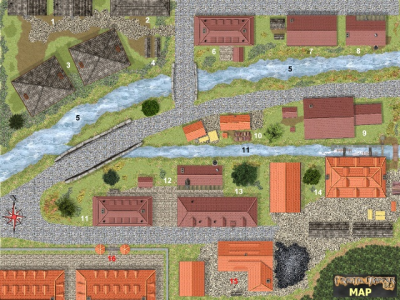 Date Added:
04/23/2012
Downloads:
1213
Description:
This week we remain in the Dreadlands, moving to the village of Nárgl's Mill. The 59th Map of the Week is from the pending Jörðgarð (TM) campaign setting release "The Northwest."

Key to the Map of Nárgl's Mill

The serfs work farm fields on the west and east sides of town. The orc warriors have their camp west of the town, beyond the serfs' fields and the map's borders.

6. North Inn with Woodshed. The inn is owned and operated by Ragnar, a male human merchant. Ragnar is the fifth generation of his family to own the inn, which now is very rundown due to a lack of overnight guests. Only the public room – the only tavern in town – does a booming business, but most of that business is in beer sales. Creatures of all walks of life that can afford a beer frequent the public room, everyone there knows who the locals are, and everyone there will spot an outsider in an instant, as long as they're still a bit sober. The inn's dark beer, heavy in malt flavor, comes from its own brewhouse (Location No. 8). It's brewed by Ragnar's wife, þórunn, a master brewmistress and human female artisan. It sells for two copper pieces per pint/half-liter tankard. Little food is served in the inn. The only entrée is a breadboard with cold cuts, dark sourdough rye bread baked by þórunn, dill pickle, cheese and horseradish. It costs three bronze pieces. The 12 drafty and dirty single rooms cost four bronze pieces a night. The four equally drafty and dirty double rooms also cost four bronze pieces a night.

7. Össur's House. This once was the stable of the North Inn, but Ragnar sold it to Össur after many years of disuse and at a time when the innkeeper's monetary reserves were getting dangerously low. Össur remodeled it into a simple house that serves his needs. He uses it whenever he is in Nárgl's Mill. Össur is an independent seemingly human male ranger who spends much of his time in the North Country, where the soldiers of the duke and the marchioness seldom go. Össur hides the features of his true race. He is in fact a half-elven agent of Karelenland.

8. North Inn Brewhouse. Thus is where þórunn brews the inn's beer and also the beer that the baron buys for the local human and orc military.

10. Unnur's Wagons. Master Wainwright Unnur, a human female artisan, makes and repairs wagons and carts for the entire Norðstræti. Her customers include the military, locals and the serf farms in Nárlgsmylla and Norðhlið. That may sound like she has a booming business. Only her carts sell well. Neither the military nor the locals on the Norðstræti use many wagons. The serf farms need several of them, but they have all they need for the time being. Barring accidents, none will be replaced for many years. But small carts and wheelbarrows do sell well. Unnur employs a journeyman wainwright, a human male artisan, and an apprentice, a human male commoner.

11. Millstream and Castle. Baron Andrés, the human male warrion and military outpost commander who exercises the local rule, has his government offices on the ground floor of the castle and his quarters on the second story. Rakel, the female intermediate draug, black necromancer, and Ingimar, the human male wizard who serve the marchioness, occupy the third story. This building is a castle in little more than name only. Before the wars when Nárgl's Mill was at its peak of prosperity, an entrepreneur named Valbjörn built both the North Inn (Location No. 6) and the South Inn (Suð Gistihús). The two inn buildings were identical in every respect. After the wars, when the South Inn long had been abandoned and empty, Baron Andrés claimed it and remodeled it.

12. Eríkur's House. This building once was the brewhouse of the South Inn. After choosing him as her vassal over the serfs in Nárgl's Mill, the marchioness gave the long-abandoned brewhouse to Eríkur. He remodeled it into a modest house.

14. Nárgl's Mill. Nárgl of the mill's name is long dead. However, his ancestors have managed to keep the mill in their possession and even expand it. The current owner is Master Miller and Master Sawyer Guðmundur, a human male artisan and descendant of Nárgl. The mill has two waterwheels. The left or west wheel turns the millstone that grinds grain into flour and feed and the gears that power the hammers that press vegetable oil from seeds. The right or east waterwheel turns the saw that cuts timber brought in from Myrkwood. Nárgl employs a journeyman miller and a journeyman sawyer, both human female artisans; two apprentices, male and female commoners, and three laborers, human male and female commoners.

Beyond the map: The serf fields extend to the north and west of the town. Beyond the western serf fields is the orc warriors' lager. South of the mapped area, one finds the small housing area of the town where most of the humans who live and work in Nárgl's Mill dwell.

TYou can get the map in two versions: