Log in to your NBOS account to upload files
Rating Submitted
Rating submission failed - please try again. If the problem continues, the feature may be broken.
All Categories > Fractal Mapper > Maps > Fantasy > Overland
Jörðgarð Map of the Week - #58 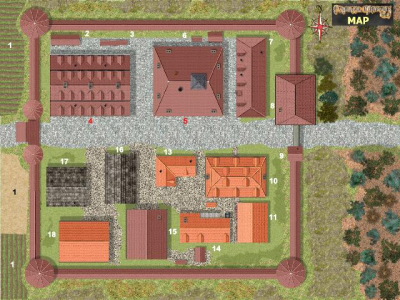 Date Added:
04/15/2012
Downloads:
1197
Description:
This week we remain in the Dreadlands, moving to the border country village of Northgate. The 58th Map of the Week is from the pending Jörðgarð (TM) campaign setting release "The Northwest."

Northgate is the only open border entry point from the fallen Æsir Empire into the duchy and the march. One could, of course, enter the march and duchy by leaving the road and going though the Myrkwood, but the forest is patrolled. There always is the danger of being found there and questioned.

Such issues are, for the most part, academic. Normally, no one at all travel from the ruins of the old empire and the Northmarch into the duchy. The only exceptions are patrols and others that þráinn or Dagrún has sent out for a purpose and who are returning, military scouting units that go a short ways into the ruins to scout for activity there and agents of the Northern Circle. The latter do not travel through Norðhlið. They attempt to slip through Myrkwood.

Three more serf housing units and vassal houses are located west of the village. Another 400 orc warriors dwell in a camp west of the farmlands.

1. Fields. These lands are worked by the serfs.

5. Castle. The small castle houses the village administration (ground floor), Baron Pétur (second story), vassal Lárusar (third story) and Jódís and Hildar, fourth floor. Jódís, who has no avatar form, has a daytime work area in the cellar of the castle.

6. Outhouse and Woodshed of the Castle.

8. Northgate Tower. This is a large tower, 90-feet/27 m high, with a 40x50-foot/12x15 m foot print. The cellar is a dungeon where prisoners can be held pending transport elsewhere. The ground floor is the military command's administration. The second through seventh stories are a military barracks, with some 50 human male and female soldiers living on each level. The magical lab used by Jódís and Hildar is on the eighth story. The ninth story is a military look out.

10. Northgate Inn. The military outpost sees to it that the public room does a roaring business, but inland guests are infrequent – mostly couriers and merchants. Most of the inn is rundown. The innkeeper is Hallgrímur, a human male merchant. His wife, Gróa, is the brewwife. The two and their oldest daughter, Tinna, run the entire inn. Meals run from 8 copper pieces to one silver piece. Gróa's lager beer costs three copper pieces per pint/half-liter tankard. The eight single rooms cost eight bronze pieces per person per night. The four doubles cost seven bronze pieces per person. The rooms are badly rundown and drafty.

15. General Store. The store is owned and subsidized by the marchioness. Her store manager is Valgerður, a human female merchant. She employs a sales person and a laborer. Both are human male and female commoners.