Log in to your NBOS account to upload files
Rating Submitted
Rating submission failed - please try again. If the problem continues, the feature may be broken.
All Categories > Fractal Mapper > Maps > Fantasy > Overland
Jörðgarð Map of the Week - #57 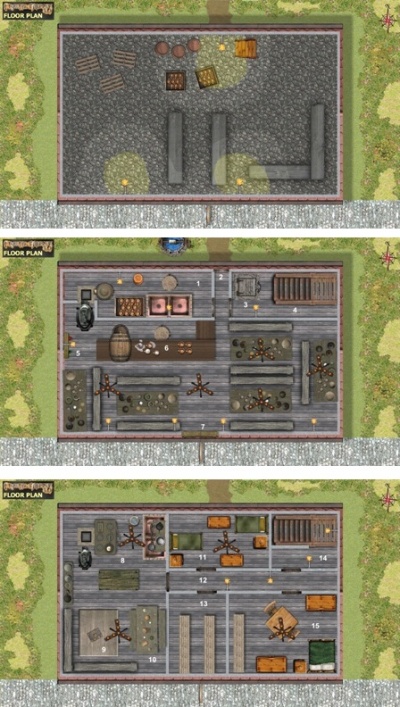 Date Added:
04/10/2012
Downloads:
1013
Description:
Here in Northern Bavaria, Easter Monday also is a aholiday, so we're a day later this week. Our 57th Jörðgarð (TM) Map of the Week comes from our forthcoming publication "The Northwest."

This week we remain in Underhill in the Dreadlands, where we look inside the Waterside Tavern.

There is no such thing as a safe haven in the Dreadlands. The closest thing to a safe haven probably is the Waterside Tavern in Underhill. But it still is a far thing from being a safe. One of the first problems adventurers face in the Dreadlands stems from the fact that almost no one travels there. This is a particular problem for outsider adventurers who slip into the Dreadlands. Strangers stand out like a sore thumb, in fact, much moreso than a sore thumb. The only folk of the Dreadlands who tend to travel are government officials, soldiers and merchants. If a stranger appears somewhere who doesn't belong in any of these categories, someone is bound to wonder who he or she is, and someone most likely will ask.

Neither the duke nor the marchioness requires travelers to have a pass to go from one location to another in the duchy and march, as is the case in the North Kingdom. But strange events do raise suspicions in the Dreadlands. If a stranger appears somewhere and can give no believable answer why he or she is there, the military watch doubtless will take an interest too.

The Waterside is the place in Underhill where a stranger is least likely to be questioned, simply because customers are used to strangers being there. The artisans, common laborers and low-ranking human soldiers who work in Underhill frequent the Waterside. Among other customers are low ranking soldiers who accompany officers who come frequently to the town. They wear no armor or insignia in their free time. The guards and commoners who accompany merchants' caravans also tend to come to the Waterside. If other strangers conduct themselves in the tavern in a manner that suggests they belong to one of these two groups, they may go unnoticed.

Finding a place to spend the night is a different matter. If other adventurers simply wander into Underhill, Gunngeir and Láru will offer them no accommodations.

Key to the Waterside Tavern

The cellar contains nothing of particular value or interest, only supplies, extra beer tankards and some full and empty beer barrel from the house brewhouse across the street.

2. Door to the Jakes, Firewood and Well.

3. Trapdoor to the Cellar Stairs.

4. Stairway to Gunngeir and Láru's apartment on the Second Story.

6. Bar. The Waterside sells nothing but the house brew.

11. Children's Bedroom. This is the room of Gunngeir's and Láru's two children, Andreu, female, 12 years old, and Sigfinni, male, 10 years old. Both are human commoners.

13. Storage Room. Both preserves that are stored in the cellar and personal items are on the shelves in this room.

14. Stairwell. This is the stairway down to the tavern.

The graphics above are reduced in size. You can get the full-sized map of the Waterside Tavern in two versions:

Next: The Dreadlands: The Village of Northgate