Log in to your NBOS account to upload files
Rating Submitted
Rating submission failed - please try again. If the problem continues, the feature may be broken.
All Categories > Fractal Mapper > Maps > Fantasy > Overland
Jörðgarð Map of the Week - #54 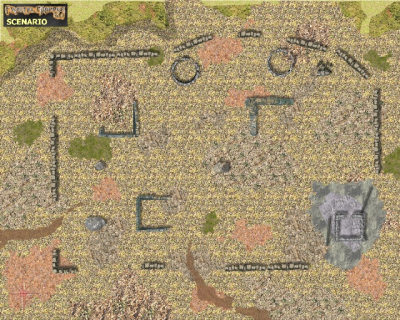 This week we take a look at the ruins of the Anger Fortress above Underhill in the Dreadlands.

Anger Hill looms above the Darkflood on the south side of Underhill. In the times before the Great Wars, the former black rider draug, Margrave Soltinn, built his feared Anger Fortress atop the hill. Many years later, after taking fallen Soltinn's place, the then new marchioness Dagrún also would have like to rule from the Anger Fortress, but she knew better.

To understand why and what's up atop the hill today, we need to look back a bit at the latter chapters of Soltinn's tale. We already have seen how the devastating blast of Dark magic that brought about Martröð's destruction has left an aura of black necromancy around his nine dark draugs. Eight of the nine were with Martröð in avatar form at the time of the high draug's fall. The blast that destroyed Martröð also destroyed the avatars of the eight dark draugs who were with him in the last battle.

Beyond that, however, the cloud of black necromancy swept on into those secret places where the eight had hidden their undead bodies, destroying them as well. The souls of the eight were doomed then to wander powerless through the void for many long years, until at last the Darkness restored them.

Soltinn, of course, was only a dark draug rider warrior and no black draug, but he too appeared on the battlefield in avatar form. When Martröð fell, the Dark magic destroyed Soltinn's avatar as well and went on then to seek out the fallen margrave's undead body in its hiding place within a vault deep beneath the Anger Fortress. It blew Soltinn's fortress apart and destroyed his body. The blast did little damage to the town of Underhill below beyond that caused by flying stones from the fortress that landed upon the town.

Nonetheless, the curious and the power-seeking who explored the fortress ruins after the destruction did not stay there long. They learned in little time that the hilltop was a strange and dangerous place. A ley line runs through what had been the fortress' grounds, and the blast of magic that destroyed Anger Fortess became unstable in that area.

The first of the curious to explore the grounds found that magical spells continually unleashed themselves there, every five minutes or so, seemingly at random, causing whatever effects they might. Some of the magic was harmless, some was dangerous and some was deadly. Over the years, other curious folk have tried to explore the hilltop, but they all have returned quickly although sometimes fewer in number, verifying that the spontaneous magic still is quite active.

You can get the map of Underhill in two versions:

Next: The Dreadlands: The tower of the dark draug Marchioness Dagrún.