Log in to your NBOS account to upload files
Rating Submitted
Rating submission failed - please try again. If the problem continues, the feature may be broken.
All Categories > Fractal Mapper > Maps > Fantasy > Overland
Jörðgarð Map of the Week - #53 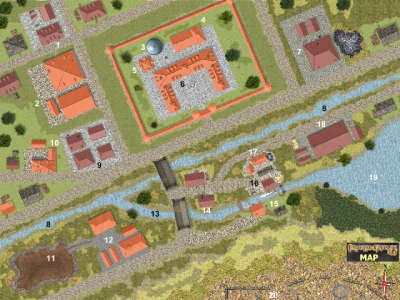 This week we take a look at Underhill, the seat of the undead red draug Marchioness Dagrún in the Dreadlands.

Key to the Map of Underhill:

2. Granary. This complex is under the control of þorgeir, the male human warrior who serves the marchioness as town steward. It consists of three buildings: A large, square granary to the northwest, a rectangular warehouse to the southeast and a small office complex to the southwest. The day-to-day operations are in the hands of the granary manager, Runólfur, a human male merchant. He employs four laborers, all human male and female commoners.

3. Dagrún's Tower. The marchioness spends most of her time here. She shares her necromancer's tower with no one except the personal guard on the ground floor. The second story begins 60 feet/18m above the ground. There is no stairway, but there is a wood elevator on the second story. Dagrún uses it to bring firewood to the upper stories. As a red draug, she has no personal need for heat, but on those infrequent winter days when there is frost in Underhill, she wants to protect sensitive spell components. The tower, which is 100 feet/30 m high, has been mapped separately.

5. Castle Tower. The almost windowless tower is 80 feet/24 m high with a dungeon and eight above-ground stories. All of the stories have ceilings 10 feet/3m high. The tower serves many purposes. The cellar dungeon is where prisoners are kept who are intended for local magical experiments. The ground floor has quarters and guard stations for part of the personal guard of the marchioness. The second story is a conference area used by the marchioness, her red draug Yrsa, her dark rider draug warrior Ævar and the intermediate draug spellcasters who serve Dagrún. Ævar has his quarters on the third story. Yrsa's library is on the fourth story. Magical laboratories are on the fifth and sixth stories. Yrsa's quarters are on the seventh story. The eighth story, the only level with windows, is a watch outpost for Dagrún's personal guard. The tower has been mapped separately.

8. Darkflood River. This small tributary of the Nyt River flows westward out of Myrkwood.

9. Floodside Inn. Ingveldur, a female human merchant, owns and operates the rundown inn on the Darkflood, the only hostelry in Underhill. Her public room does decent regular business serving public officials, soldiers and merchants, but the kitchen does only modest business. The inn has few overnight guests and these only infrequently. Those guests who do spend the night usually are in Underhill either on official business or as members of merchant caravans. Meals, of relatively low quality by the general standards in the jörð, run between three bronze pieces to more than a silver piece. The only drink on sale is the house ale, brewed by Ingeveldur's alewife, Hildur, a female human artisan, who also is a spy for the Northern Circle. Her ale costs 3 copper pieces per pint/half-liter tankard. The six single rooms cost a silver piece per night. The inn complex includes Hildur's brewhouse, a rickety stable for guests' horses and a large woodshed.

14. Waterside Tavern. Gunngeir, a male human merchant and spy for the Northern Circle, owns and operates this popular tavern alongside the millstream. His wife, Láru, a human female artisan, is the brewwife. She makes the house lager beer in the brewhouse across the street from the tavern. The artisans, common laborers and low-ranking human soldiers who work in Underhill frequent the Waterside. The house has neither a food menu nor waiters or waitresses. The only item offered is Láru's house brew at 3 copper pieces per pint/half-liter tankard. Customers need to go to the tap to order a first tankard or later refills. Gunngeir does not work together with the circle's other spy in Underhill, Hildur in the Floodside Inn. The two are not even aware that they both spy for the circle. Between them, however, the Æsir druids are able to obtain considerable information from all levels of humans in the town.

17. Einar's Smithy. Master Blacksmith Einar, a human male artisan, does all of the day-to-day metal work in Underhill as well as shoeing horses. He refers those who see work with weapons or armor to Erla's Weapon Works (No. 7). However, that happens only seldom. Outside of the military, there are few in the march who are armed. Einar employs a journeyman blacksmith, a human female artisan, and an apprentice, a human male commoner.

20. Ruins of Anger Fortress. The dark rider draug Margrave of the New Homeland March, Soltinn, ruled from the fortress before the Great Wars ended. Soltinn went to war in an avatar form. His true draug body remained in stasis in a hidden vault beneath the fortress. When the High Draug Martröð was destroyed in the wars' final battle, all of those who served him on the battlefield met their destruction too. For Soltinn, that destruction did not end with his avatar body. The wave of evil magic that emanated from the vanquished Martröð reached into the Anger Fortress in Underhill as well, destroying much of the fortress before reaching down into Soltinn's vault and destroying his draug body as well. The magical blast disturbed the magical balance in and within 100 feet/30 m of the ruins, a situation that continues today. Magic simply unleashes itself, chaotically and seemingly randomly, here, there and there within the ruins, several times daily.

The graphic above is reduced in size. You can get the full-sized map of Underhill in two versions:

Next: The Dreadlands: Ruins of the Anger Fortress.