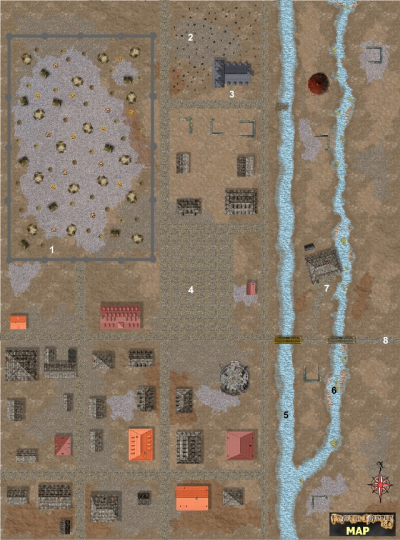 This week we take a look at Eagle Harbor, once the booming ruling seat of what has become the Dreadlands, one of the most repressive lands in the world called the Jörð. Before the Great Wars, this land was the ruling seat of the Northy Duchy in the Æsir Empire's Kingdom of Viðurland. The Duchy, ruled by the Dark Draug Duke þráinn, consisted of two marches. The North March, to the east, was destroyed in the wars, but þráinn survived and his western New Homelands March remained unscathed by battle.

Today, what remains of the duchy and the western march have identical borders. The draug duke remains holed up in his Eagle's Nest Fortress in the mountains above Eagle Harbor. There is no question that he is the absolute ruler of the lands claimed by the duchy and the march, now called by most the Dreadlands. However, the duke does delegate the day-to-day fulfillment of his will to the red draug Marchioness Dagrún in Underhill, to the southwest.

The Great Wars did no damage to Eagle Harbor, but the postwar curse of the necromantic aura that attached itself to the nine drak draugs of the fallen High Draug Martröð did devastate the town. þráinn is one of the nine. He too inherited this curse after Martröð's destruction. As a result, no form of life can survive for long within a wide radius around þráinn's castle. Eagle Harbor is within that radius. As a result, Eagle Harbor has no permanent life. It is a town that stands on dead mud. There are not even fish in the part of the Gunnthrá River that flows through the town. All humans who lived there were forced to flee.

The only living creatures that usually can be found in Eagle Harbor are the orc warriors of the duke who are stationed there, and they must rotate their duty posts regularly to stay alive. The other beings that dwell in Eagle Harbor are undead draugs, most but not all of them in service to the draug duke. They dwell in structures that once housed the town's human population. However, there were many more humans in town than there are draugs now. Thus, much of Eagle Harbor is falling into ruin.

As mentioned, not all of the draugs in Eagle Harbor serve the duke. In the summer, two dark draugs that were not in Martröð's service dwell in their own castle in town. They are known only as the King and Queen of Dust. The are not under þráinn's command, and he and these two dark draugs have no communications with one another. Together with their following of autumn draugs, the King and Queen of Dust return to Eagle Harbor shortly before the summer solstice each year. At that time, the autum draugs return to their graves in the cemetery that surrounds the castle. The King and Queen of Dust spend the summer awake in their castle. At the autumn equinox, they awaken their autumn draugs, call them forth from their graves and lead them southward to seek new victims.

Key to the Map of Eagle Harbor

1. Orc encampment. The camp is surrounded by a strong, wooden wall 6 feet/180 cm high that is made out of beams a foot/30 cm thick.

2. Tombstones of the Autumn Draugs.

3. Castle of the King and Queen of Dust.

4. Marketplace. There have been no markets for years. The square is empty.

6. Millstream. The stream slowly is reverting back to nature, but without life forms.

7. Gunnthrá Mill. Many years have passed since grain last was ground here. The abandoned mill building is a ruin. Its waterwheel vanished long ago.

8. The Road to the Fortress. This is the only road to þráinn's Eagle Nest Fortress and his dungeon, the Depths of Darkness and Hopelessness.

You can get the map of the Eagle Harbor in two versions:

Next: The capital of the western march in the Dreadlands: Underhill.