Log in to your NBOS account to upload files
Rating Submitted
Rating submission failed - please try again. If the problem continues, the feature may be broken.
All Categories > Fractal Mapper > Maps > Fantasy > Overland
Jörðgarð Map of the Week - #50 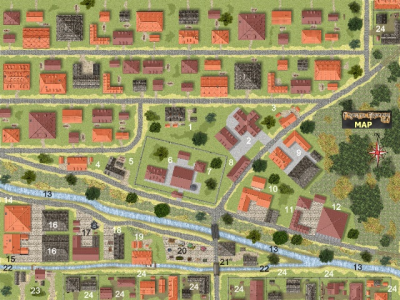 Green Meadows is in the North Kingdom, which is ruled by vampire draugs. It is the ruling seat of vampire draug Duke Břetislav, but there isn't too much else to distinguish it from other medium-sized towns.

Key to the Center of Green Meadows

Lead Creek (Location No. 13) flows through Green Meadows from the ruins of the Æsir settlement of Blýhæður (Lead Heights) and its source in the Evening Hills forest. The creek is dammed west of the mapped area, where it forms a large mill pond that also is used to breed freshwater fish. The millstream is diverted from the pond to serve both Jonáš' Sawmill (Location No. 23) and Bohdana's Grain Mill (Location No. 19). Unnumbered buildings on the map can be considered residential, but they also are available to game masters who may wish to use them to add new locations specific to his or her adventure.

2. Greenlands Garrison. The human warriors who serve under Commander Krýstina, a human female warrior, are the only soldiers in the duchy who are stationed on a permanent basis. All of the duchy's soldiers with families are stationed here. Those serving duty in Mine City, Lignite City, Northwatch Hold and Northwatch are single. They rotate regularly between the three strongholds. Due to these disadvantages, they receive a higher sold than those stationed in Green Meadows. The garrison's soldiers are responsible for patrolling along the Fjörm Valley swamps as far north as the Niklas' Mill ruins and the Mine City-Green Meadows road. They also are the duchy's police force. The few soldiers of the garrison who have no families live in the compound. Those families live in residential housing in town.

5. Chandler Slavomir. Master Chandler Slavomir, a human male artisan, makes candles for the greater Green Meadows area. Caravans of the Royal Ministry of Trade also bring his products to more distant markets within the kingdom. His tallow is shipped northward from the rendering house in Lone Dell in the Meadowlands Duchy. Slavomir employs a journeyman chandler, human male artisan; and an apprentice, a human female commoner.

6. Lead Valley Castle. This is the castle complex of the vampire draug warrior Duke Břetislav. His governmental administration, headed by his steward Ilja, a human male merchant, is in the building to the west or left of the duke's small palace. The government employs six clerks, all human male and female merchants, and four laborers, all human male and female commoners. The duke's crypt is in the cellar dungeon level of the palace.

7. Prison Tower. Floor plans and a description of the tower can be found with Map of the Week No. 45. The jailer is Květoslav, a human male commoner and murderer. He was sentenced to spend the rest of his life in the tower after he killed another man in a tavern brawl. His wife, Klára, a human female commoner, agreed to remain with him there when the duke gave him the opportunity to become a trusty jailer. Neither Květoslav nor Klára takes any interest in the tower's prisoners.

10. Green Clover Inn. The inn's public room is a popular watering hole in Green Meadows. Guests usually are members of trade caravans from the Royal Ministry of Trade. The owner and innkeeper is the widow Anastázie, a human female merchant. She charges 8 bronze pieces a night for her six single rooms and 1 silver piece per person nightly for the one double. Cold meals run between 1 and 4 bronze pieces, warm meals between 4 and 8 bronze pieces. The only beverage is the house brewed lager beer, which sells for 3 copper pieces a pint/half liter tankard. Anastázie's brewmistress is Ada, a human female artisan. The inn employs three waiters and waitresses, two cleaning ladies and a laborer, all human male and female commoners.

17. Dušan's Smithy. Master Smith Dušan, a human male artisan, is the blacksmith of Green Meadows and also repairs armor and weapons for the garrisons. He employs two journeyman smiths, human male and female artisans, and an apprentice, human male commoner.

20. Market Square. Most of the stands are operated by locals. The market is the only place where one can buy fresh crops and produce, sold by the local farmers who raise them. Anyone wishing to run a stand must acquire a permit from Town Hall (Location No. 11).

21. Mill Fish Tavern. Master Alewife Olga, a human female artisan, owns and operates this popular pub. She employs a bartender, Felix, a human male merchant; two waitresses, both human female commoners, and a laborer, a human male commoner. In her brewhouse behind the tavern, Olga brews a smooth light ale. It sells at 3 copper pieces per pint/half liter tankard. Cold boards with smoked trout from the mill pond and Lead Creek, bread, cheese and dill pickles are available for 3 bronze pieces.

You can get the map of Green Meadowsin two versions:

Next: Map of the Dreadlands.