Log in to your NBOS account to upload files
Rating Submitted
Rating submission failed - please try again. If the problem continues, the feature may be broken.
All Categories > Fractal Mapper > Maps > Fantasy > Overland
Jörðgarð Map of the Week - #49 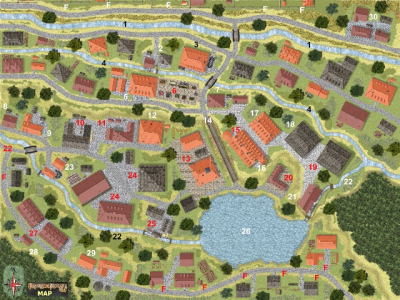 Grain Meadows is in the North Kingdom, which is ruled by vampire draugs. It is the ruling seat of vampire draug Duchess Hedvika, but there isn't too much else to distinguish it from other medium-sized towns.

Key to the Center of Grain Meadows

The southwestern part of the town is on a steppe that is about 20 feet/6 m higher than the northeastern section. The Middlewash (Location No. 1) flows into the upper section. When its course still was natural, it formed a waterfall just beyond the upper left hand corner of the map. The Æsir dammed the river to form two mill ponds, one to the left or west of the mapped area and the other on the upper step in the lower right (east) part of the map. The Lower Millstream (Location No. 4) flows directly out of the millpond beyond the map. Instead of having waterfalls, the Middlewash and the Lower Millstream both have double dams that are beyond the edge of the mapped area. The Upper Millstream (Location No. 22) also flows out of the unmapped mill pond. It flows through the town's upper steppe, powering Silvestr's Hammersmithy (Location No. 23) and Jiřina's Sawmill (Location No. 25), flowing from there directly to the drop in the landscape. Instead of plunging over the drop as a waterfall, the Upper Millstream is channeled to power the top-driven twin waterwheels of the Ducal Grain Mill (Location No. 21).

1. Middlewash. This narrow river flows down from the Foggy Mountains of Orchome in the west. (See the description above.)

5. Edita's General Store. Edita, a human female merchant, buys both local goods and wares brought in by caravans of the Royal Ministry of Trade. She offers them for resale. She employs three sales persons and two laborers, all human male and female commoners.

7. Market Tavern. Ilja, a human male merchant owns and runs the tavern. It serves only the dark beer brewed by his wife, Jitka, in the brewhouse behind the tavern. The beer costs two copper pieces for a pint/half-liter tankard.

12. Ducal Tithing House. The ducal treasurer, Galina, a human female merchant, is the nominal head of this operation. On a day-to-day basis, however, it is run by the ducal tithe master, Bořivoj, a human male merchant. Taxes in the form of tithed crops and products are delivered here, where Bořivoj keeps the books. Bořivoj supervises a crew of three bookkeepers, human male and female merchants; four laborers, human male and female commoners, and four soldiers from the garrison, who provide police service. Goods are stored in the tithing house, pending further distribution or sale.

13. Town Hall and Granary. Burgomaster (Starosta) Anděla, a human female merchant, heads the town government. It employs six clerks, all human male and female merchants, and eight laborers, all human male and female commoners. Storage crops and grains that are the town's share of the tithes are kept in the granary to feed the folk in times of emergency. The town's jail is in the cellar of the town hall.

14. Ravine Bridge. The bridge crosses no water. Instead, it leads the town road up the side of the slope, connecting the lower town with the upper town.

16. Prison Tower. Floor plans and a description of the tower can be found on pages 34 to 37. The jailer is Teodor, a human male commoner, murderer and thief. He was sentenced to spend the rest of his life in the Timbertown tower after he killed a soldier who tried to arrest him. Teodor survived 11 years as vampire draug fodder before being made a trusty jailer. His wife, Nora, a human female commoner, remained faithful to Teodor during his 11 years in the tower and agreed to remain with him there when the duchess gave him the opportunity to become a trusty jailer. Neither Teodor nor Nora takes any interest in the tower's prisoners.

17. Ducal Staff Housing). All human castle employees except Jindřiška and their families dwell in this complex. It is off limits to attacks by vampire draugs.

20. Grain Meadows Garrison. Erik, a human male warrior, is the commander of the 170-man garrison. The contingent includes a 12-member unit of the king's Iron Guard (Železogarda). They wear helmets and armor of iron, bear iron swords and can fire arrows with iron tips. The main duties of the garrison are police work and seeing to it that no subjects of the king escape the kingdom.

21. Ducal Grain Mill. The duchy's largest grain mill is owned by the duchess and run for her by Master Miller Květoslav, a human male artisan. From the viewpoint of the vampire duchess, the mill is strictly a business venture. Most of the grain gained by the duchy through tithing is milled here, producing flour, fodder and vegetable oil which is sold locally and transported to other parts of the duchy by caravans of the Royal Ministray of Trade. Květoslav employs two journeyman millers, human male and female artisans; two apprentices, human male and female commoners, and a laborer, a human male commoner. Květoslav and his family live in the mill building.

23. Silvestr's Hammersmithy. The main customer of Master Smith Silvestr, a human male artisan, is the garrison. With the help of his waterwheel-powered hammer, Silvestr makes and repairs all of the non-iron weapons and armor in the garrison. He also does private work, but most of it is limited to heavy duty jobs that Blacksmith Drahoslav (Location No. 3) can't handle. Private customers prefer doing business with Drahoslav, when they can, because his prices are lower. Silvestr employs two journeyman smiths, human male and female artisans; three apprentices, human male and female commoners, and a laborer, human male commoner.

24. Grain Meadows Food Packing. Owner Olga, human female merchant, buys and packs any kind of food that can be processed for a reasonable shelf life. Caravans of the Royal Ministry of Trade take her products on commission and bring them to markets all over the kingdom for resale. Her operation packs meat and trout in barrels of brine, cans fruits and vegetables and dries others, as well as spices, and sacks dry grains. Olga employ a bookkeeper, human female merchant, and 12 laborers, human male and female commoners.

27. Royal Ministry of Trade Warehouses. Goods awaiting shipment by the ministry's caravans or that already are in transit are stored here.

30. Crossroads Inn. The restored Æsir inn is believed to be the oldest structure in Grain Meadows. It is owned by the duchess and operated by innkeeper Iva, a human female merchant. Almost all of Iva's overnight guests are members of trade caravans, but locals always can be found in her public room. The inn has a stable and its own brewhouse, where brewmistress Otýlie, a human female artisan and Iva's sister, brews the house lager beer. The inn has 10 single rooms at 1 silver piece a night and two doubles at 8 bronze pieces per person per night. The house lager costs 3 copper pieces per pint/half liter tankard. Meals, hot and cold, run from 3 bronze pieces to more than 1 silver piece per serving.

You can get the map of Timbertown in two versions:


Both versions are released for personal and commercial use under the Open Game License Version 1.0a, which you can read on the Jörðgarð web site.

Next: Green Meadows in the North Kingdom.