Log in to your NBOS account to upload files
Rating Submitted
Rating submission failed - please try again. If the problem continues, the feature may be broken.
All Categories > Fractal Mapper > Maps > Fantasy > Overland
Jörðgarð Map of the Week - #48 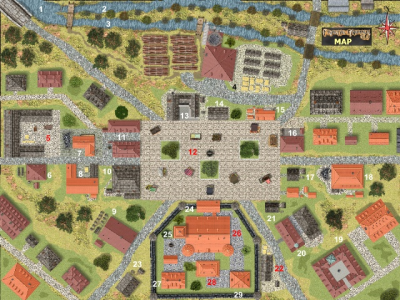 Timbertown is in the North Kingdom, which is ruled by vampire draugs. It is the ruling seat of vampire draug Duke Hynek and the Woodlands Duchy, but there isn't too much else to distinguish it from other medium-sized towns. Its significant factors are that it's a crossroads, the point where three important roads intersect, and it's the largest wood processing center in the North Kingdom.

Key to the Center of Timbertown

7. Vojtěch's Smithy. Master Blacksmith Vojtěch, a human male artisan, makes and repairs a wide variety of bronze items and he shoes horses, but he does no work with weapons or armor. Vojtěch employs a journeyman blacksmith, a human female artisan, and two apprentice blacksmiths, both human male commoners.

10. Timbertown General Store. Shopkeeper Nataša, a human female merchant, offers a wide variety of goods in her store. Most items are manufactured elsewhere in the kingdom, but she also has foreign wares imported by traders and smugglers from Slovania. Nataša employs a bookkeeper, human female merchant; three salespersons, all human male and female commoners, and two laborers, also human male and female commoners.

11. Market Inn. The inn is owned by Duke Hynek and operated by innkeeper Hedvika, a human female merchant. The inn has eight single rooms at 6 silver pieces a night and one double at 5 silver pieces per person nightly. It also has a stable and coach house. Meals in the public room run between 3 and 6 bronze pieces. The only drink is the local beer, Timberbrew (Dřívípivo), on tap, at three copper pieces per pint/half-liter tankard.

12. Market Square. Anyone wishing to set up a stand must obtain a permit from town hall (Location No. 20). Most stands offer produce, sausage and other farm products.

13. Timber Brewery. The brewery - the only brewing house in Timbertown - is owned and operated by Patrik, a human male merchant. One of his ancestors was among the early settlers of the North Kingdom and a follower of King Vladimir. He restored a small Æsir brewhouse on the site of the current brewery and its neighboring tavern. There were no inns in the town at the time. However, as the town grew, the duke built his Market Inn (Location No. 11), and later the Castle Cellar Tavern (Location No. 23) opened. Patrik's ancestors were able to convince the owners of both that it was more economical to buy his beer than to run separate brewing houses. This is an idea that is not yet widespread in the jörð. Patrik runs the brewery, but his wife, Naděžda, a human female artisan, is the brewmistress. She brews a lager beer year round and supplements it with a dark and strong double bock beer in the cold months. Patrik and Naděžda employ a journeyman brewer, human female artisan; an apprentice brewer, human female commoner, and three laborers, human male commoners.

14 Timber Brew Tavern. The tavern is the favorite hangout of Timbertown's artisans and laborers. It also is the place where many locals go with large tankards in the evening to buy beer to bring home rather to drink on premise. The Timber Brew serves no food. It is owned by the neighboring brewery and operated by tavernkeep Denisa, a human female merchant. She employs two human male and female commoners to work the tap and serve tables. A pint/half liter of lager beer costs 3 copper pieces. A pint/half liter of double bock in the cold season costs 4 copper pieces.

19. Timbertown Garrison. Commander Vladěna, a human female warrior, has 220 soldiers in her service. They perform guard and police duties and patrol the border and the draug swamp region. Soldiers with families live in housing in the town. Those who are single live in the garrison barracks.

25. Prison Tower. Floor plans and a description of the tower can be found in Map of the Week No. 45. The jailer is Radomir, a human male commoner and double murderer. He was sentenced to spend the rest of his life in the Timbertown tower after he killed his widowed sister-in-law and her lover. The not quite sane Radomir committed the murders to avenge the memory of his dead brother, whom he thought was betrayed by his widow when she took up after his death with another man. Radomir survived 12 years as vampire draug fodder before being made a trusty jailer. His wife, Běla, a human female commoner, remained faithful to Radomir during his 12 years in the tower and agreed to remain with him there when the duke gave him the opportunity to become a trusty jailer. However, both continue to lead miserable lives. Radomir's insanity has taken the form of severe depression. Although he is allowed to go about in the town whenever Běla stays in the tower, he never leaves the castle compound. Běla has become a hopeless alcoholic. She spends most of her time during the day in the tower, but when night falls, she flees the tower and goes to the Timber Brew Tavern (Location No. 14), where she usually stays and guzzles beer until someone leads her back to the castle gate. Neither Radomir nor Běla takes any interest in the tower's prisoners.

Unnumbered Buildings should be considered residential, unless the game master wishes to add his or her definition for these structures.

Beyond the Map one finds the mill pond and residential structures, and then on the outer ring on the town's edges, farms.

You can get the map of Timbertown in two versions:

Next: Grain Meadows in the North Kingdom.