Log in to your NBOS account to upload files
Rating Submitted
Rating submission failed - please try again. If the problem continues, the feature may be broken.
All Categories > Fractal Mapper > Maps > Fantasy > Overland
Jörðgarð Map of the Week - #47 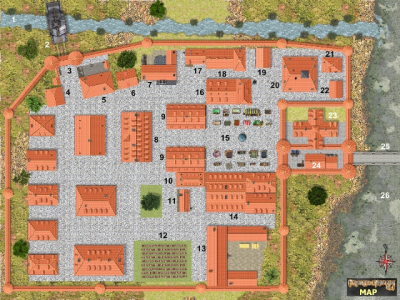 The town of Kingsgate is in the North Kingdom, which is ruled by vampire draugs. It's extremely difficult for subjects of the vampire draug king to escape the kingdom, because it is bound by the dangerous mountains of Orchome on one side and thousands of swamp and varrow draugs on the other side. Only one road leads safely in and out of the kingdom. It crosses the Fjörm River swamps on the one surviving bridge and leads into the closed town of Kingsgate.

Foreign merchants and their caravans may enter and leave the kingdom at Kingsgate. but only a privileged few of the king's subjects are allowed to enter the town, making it too a closed escape route.

1. Timber Creek. The fast-flowing creek has its source about 20 miles/32 km to the west in the Evening Hills Forest. Along the length of the town, it is dangerous at night, because swamp draugs tend to come upstream that far in the dark hours.

2. Timber Bridge). The wooden covered bridge keeps swamp draugs from attacking travelers who cross the creek in the dark hours.

3. Timbergate. Eight soldiers, including two members of the Iron Guard, always are on duty here. A pass is required to leave town here.

5. Mahulena's Bakery. The only bakery in town. It is owned and operated by the master baker Mahulena, a human female artisan. She employs two journeymen bakers, both human male artisans, as well as two apprentices and four salespersons, all human male and female commoners. Mahulena also sells baked goods on the market place.

6. Swamp Refuge Tavern. The tavern is owned and operated by Rostislav, a human male merchant. He buys his beer from the Evening Hills Gateway Inn (Location 10) and sells it at 5 copper pieces per pint/half liter tankard. He also sells domestic schnaps at 1 silver piece per shot/0.1 l glass. The only food available is a bread board with bread, cold cuts and a dill pickle at 1 bronze piece. Rostislav was recruited many years ago as a spy for the Dreadlands. He has a magic ring from the Dreadlands that can change his appearance and a counterfeit pass to allow him to escape if he ever becomes suspect. He passes his information to Dreadlands agents from Slovania who come to Kingsgate as merchants.

8. Royal Ministry of Trade. The ministry is the only office of the royal government headquartered outside of Vladimir's Throne, and the Minister of Trade Drahomira, a human female merchant, is the highest ranking person in the town and one of the highest ranking humans in the kingdom. The Royal Steward Pankrác, a male vampire draug warrior, and Garrison Commander Jeroným, a human male warrior, both must bow to her commands. The ministry's employees monitor and keep records of all trade with outsiders, collect customs taxes and decide who can buy and sell which merchandise where. The ministry also buys, stores and ships all goods ordered by the royalty and higher nobility. It employs 30 human males and females of varying professions.

10. Evening Hills Gateway Inn. The inn is owned and operated by Sylva, a human female merchant native to Slovania who spies for the Northern Circle. She is an outsider who came to Kingsgate and stayed, although few locals remember that. She passes her news on to the circle with the help of a magic scarab. Her inn brews its own house lager beer, served at 5 copper pieces per pint/half-liter tankard, and she sells wines from the central duchy at 1 to 9 silver pieces per quart/liter bottle. She has 12 single guest rooms at 9 bronze pieces nightly and two doubles at eight bronze pieces per person nightly.

12. Community Woodyard. The town's lumberjacks bring the firewood that they cut in the Evening Hills Forest here to dry for two years before it is burned. The firewood operation belongs to the town and is operated by the town government. All building owners are charged an annual firewood tax. In return, they may take wood from the yard whenever they need it.

14. Trade Halls. This complex of three buildings houses offices, shops and storage rooms of free merchants and service outlets. It also is the location where Blažena, the town's human female healer, and her aides offer their services. The biggest operation belongs to Pravoslav, the human male merchant who operates the biggest free merchant (private, non-governmental) in the kingdom.

15. Market Square. The market is open to domestic and foreign farmers, traders and peasants. A wide variety of constantly changing produce and goods is offered here, depending upon who is in town on any given day.

20. Town Hall. The two key figures are the royal steward Pankrác, a male vampire draug warrior, and Town Administrator Dita, a female human merchant, his key aide. The town administration is in the two-story wall. Pankrác dwells in his own chambers on the second story. His crypt is in the cellar apart from the dungeon jail. The town has 12 employees, human male and female merchants, scholars and commoners.

23. Swamp Wall Garrison. Jeroným, a human male warrior, is the commander of the 220-man garrison. The contingent includes a 24-member unit of the king's Iron Guard. They wear helmets and armor of iron, bear iron swords and can fire arrows with iron tips. The main duties of the garrison are police work and seeing to it that no subjects of the king escape the kingdom. The soldiers also keep a close eye on the draug-filled Fjörm swamps that mark the kingdom's border.

24. Royal Customs House. Six soldiers from the garrison and two officials from the Royal Ministry of Trade always are on duty here. All traffic between the kingdom and the ruins of the Æsir Empire must pass this gate. Outsiders can obtain a three-day pass for the inner town here, but all other passes are issued at the town hall. The customs house inspects all goods brought into and out of the kingdom. Anyone entering the outer gate with goods receives along with his or her pass papers a list of all merchandise being brought into the kingdom along with an officially set value for each product. This is used later to calculate customs taxes.

25. Fjörm Bridge. This is the last surviving bridge from the Æsir desolation into the North Kingdom. The stone, built by the kingdom to replace the older wooden Æsir bridge also is one of the monarchy's major concerns. The Fjörm swamps are rising and beginning to threaten this bridge too. The government has pondered building another level atop the bridge before the roadway is under water, but there are doubts that the old bridge will support the additional weight. (The kingdom is not aware that druids of the Northern Circle who are working on the opposite bank slowly are cleansing the swamps and purifying the Fjörm. Their efforts eventually will keep the bridge from being flooded.)

26. Fjörm Swamp. In the days of the Æsir Empire, the Fjörm was a clean, wide, shallow and slow-flowing river in its stretch along what now is the North Kingdom's border. The magic of the fallen high draug Martröð made the decaying swamp of it that it is today. At Kingsgate, the swamp is some 300 feet/90m wide. Am estimated 1,000 swamp draugs are in the area along the town's banks.

You can get the dungeon plan of the prison tower in two versions:

Next: Timbertown in the North Kingdom.