Log in to your NBOS account to upload files
Rating Submitted
Rating submission failed - please try again. If the problem continues, the feature may be broken.
All Categories > Fractal Mapper > Maps > Fantasy > Overland
Jörðgarð Map of the Week - #46 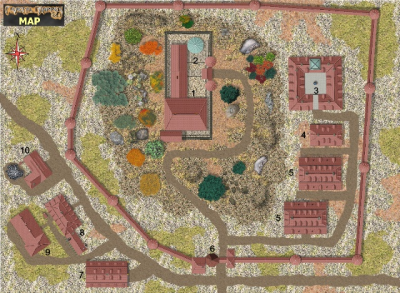 The town of Vladimir's Throne is the capital of the North Kingdom, although it's only a small village. King Vladimir and his court mage, Mstislav (who is the true ruler) both are vampire draugs. They dwell in Vladimir's Throne. Vladimir resides in his castle and Mstislav in his neighboring Black Tower.

This is their base of operations. They don't want to be disturbed. For that reason, most of the village also is closed. Only those who live in Vladimir's Throne - inside or outside of the wall - and the country's three vampire draug dukes have passes that allow them to enter inside the village wall. All others must remain in the small settlement outside the wall. Those who work or live outside the wall still are legal residents of Vladimir's Throne and have passes to enter the gate.

The castle and black tower are on a small hill (50 feet/15 m above the surrounding terrain) just north of where the old Æsir city of Nýrækt stood. The royal seat of King Vé later became the main lair of the High Draug Martröð, who impersonated the dead Vé until Martröð's own destruction. An after effect of Martröð's destruction was that all things within a large area around Nýrækt were destroyed, and it turned into a dark necromantic zone like those surrounding the current lairs of the eight dark draugs in the Æsir desolation. The lands near Vladimir's Throne are recovering slowly. At first, trees began to sprout and then grow on the fortress hill. Now coarse grasses are coming up. However, the day when crops, grain or fruit can be raised again near the royal village probably remains distant.

1. King Vladimir's High Fortress. The king, his staff and the government administration occupy all of the complex except the tower (Location No. 2). Vladimir and his highest servants all dwell in the castle complex. The other servants live in the housing units inside the wall (Locations numbered 5). Vladimir's treasure, some 500.000 GP worth of gold and silver, his vault of iron items and the crypts of the king and Věnceslav all are in the subterranean dungeon level. Only Vladimir and his highest servants are allowed to enter the dungeon. Its entrance is well guarded by human soldiers and magi.

2. Mstislav's Black Tower. Mstislav and his highest servants dwell in the tower. No one else is allowed to enter of their own choosing except through the entry level on the ground floor, which has openings to the castle and the courtyard. The entrances are well guarded by human soldiers and magi. Mstislav has treasure, some 2,000,000 GP worth of gold and silver, and his crypt and those of his vampire draug servants are in the subterranean dungeon. No one is allowed in the dungeon except the three vampire draugs and Anděla, his foremost human servant.

3. Royal Military Garrison . The garrison is the base of 220 elite human soldiers and war magi who are in service to and under the direct command of the king. There are 150 human warriors in regular service, another 50 human warriors who are members of the king's Iron Guard and 20 human magi, sorcerers and wizards, the latter all of low to middle level. The commander, Doubravka, a female human warrior, lives in the compound, as do its other members without family in Vladimir's Throne. Those with families live in the housing units inside the wall (Locations numbered 5).

4. Royal Emporium . This large store is one of the biggest in the kingdom, and it certainly has the finest selection of all. Those who dwell in Vladimir's Throne are the king's most valued and trusted servants, and they are rewarded well. Most things that people might want to buy are available here or can be ordered. Royal caravans bring the goods to the village. The king's merchants have the first chance to buy any foreign wares that arrive in Kingsgate.

5. Royal Housing. Each of these fortress-like stone buildings is five stories high with eight luxurious (by North Kingdom standards) apartments per story. Almost all residents of Vladimir's Throne live in this complex.

6. Royal City Gatehouse. As already mentioned, only true residents of Vladimir's Throne and the three vampire draug dukes have permanent passes allowing them entry at the gate. The dukes also may take a small number of servants with them, but their servants have no gate passes of their own. Temporary passes for other visitors are granted only very rarely, at the wish of Mstislav or the king.

7. Royal Warehouse. When royal caravans arrive, they bring their wares here. Caravans are not allowed to pass the outer gate. Most goods in the warehouse are intended for the emporium (Location No. 4).

8. King's Inn and 9. The Inn's Stable. The inn has a large public house that is frequented not only by traveling visitors but also by those who live in and outside of the wall. On the southeast side of the inn is its brewhouse, where its lager beer is brewed. The inn's guest rooms and stable usually are used only by trade caravans that are bringing goods to the castle or that are spending a night while traveling on to market towns. The inn is property of the crown. It is run for the king by the jovial innkeeper Alexej, a male human merchant. His brewmaster is the brewmistress Oldžiška. Alexej also employs two cooks, both human male master artisans, and two waiters, six waitresses, four room maids and two stable boys, all human male and female commoners. The inn's beer costs 5 copper pieces per pint/0.5 l tankard. Means run 3 to 6 silver pieces. Rooms cost 7 silver pieces per night for the 10 singles and 5 silver pieces per person for the two doubles.

10. Royal Smithy. The master smith Zdeňka, a human female artisan, runs the smithy, which is property of the crown. She employs four journeyman smiths, all human male and female artisans, and two apprentices, both human male commoners. The smithy manufactures nothing except occasional small replacement parts. It is responsible not only for repairing metal items of the local folk and passing caravans but also for maintaining the weapons, armor and metal equipment of the military garrison.


You can get the dungeon plan of the prison tower in two versions:

Next: The town of Kingsgate in the North Kingdom.