Log in to your NBOS account to upload files
Rating Submitted
Rating submission failed - please try again. If the problem continues, the feature may be broken.
All Categories > Fractal Mapper > Maps > Fantasy > Overland
Jörðgarð Map of the Week - #44 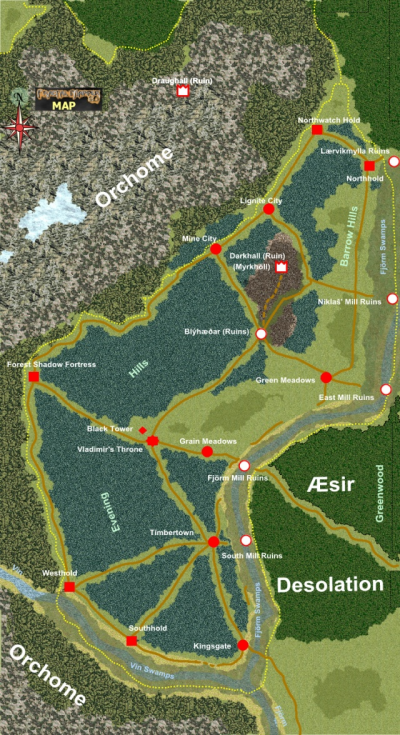 Date Added:
01/08/2012
Downloads:
1303
Description:
Our 44th Jörðgarð (TM) Map of the Week and first map for the New Year 2012 takes into the vampire-ruled North Kingdom, also known variously as Hræsvelg and the Barrow Hills. The kingdom is ruled nominally by the vampire draug King Vladimir, although the true ruler is his court mage, the vampire draug and black necromancer Mstislav. Vladimir's will and that of all other vampire draugs in the kingdom is enslaved to the mind of Mstislav.

The North Kingdom is on the western border of the ruins of the Æsir Empire that we examined over most of the past year. The Great Wars touched little of these lands. Therefore, they were not left in a state of ruin but merely were abandoned by the Æsir. After the war, Vladimir, who then still was a human warrior from Windland, farther to the south, led his adventurers into the ruins to loot. They found considerable treasure there including some weapons of iron, which the draugs of the Darkness cannot withstand.

In their travels, Valdimir's band discovered that most of the Evening Hills region of the fallen empire still was intact but abandoned. They claimed it and established their new kingdom there. Only afterward did Mstislav uncover the secrets of making vampire draugs, who, unlike draugs of the Darkness, suffer no ill effects from iron. Mstislav underwent his own magical transfiguration as a vampire draug and then offered this opportunity to becaume quasi-immortals to Vladimir and 48 other high-ranking humans, making vampire draugs of all of them, but at the same time enslaving them to his will.

The predominantly human population is for the most part trapped within the North Kingdom. The orc tribes in the Foggy Mountains of Orchome prevent their flight to the west. The Fjörm River swamps mark the kingdom's southern and eastern borders. These are inhabited by thousands of swamp draugs who make flight in that direction impossible. To the north and northwest are the Barrow Hills, where the souls of fallen human officers of the Dark Army are bound as barrow draugs to their crypts, all hungry for humans that they can trap.

Vladimir's Throne is the capital of the North Kingdom. The closely guarded town of Kingsgate in the southeast is the only settlement that still has a bridge intact across the Fjörm swamps. The town is closed to most folk of the kingdom but open to Slovanian traders who enter from the ruins of the Æsir Empire.

We'll be looking at the North Kingdom in more detail in the weeks to come.

You can get the map of the North Kingdom in two versions:

Next: The prison towers where the vampire draugs feed on captives.