Log in to your NBOS account to upload files
Rating Submitted
Rating submission failed - please try again. If the problem continues, the feature may be broken.
All Categories > Fractal Mapper > Maps > Fantasy > Overland
Jörðgarð Map of the Week - #42 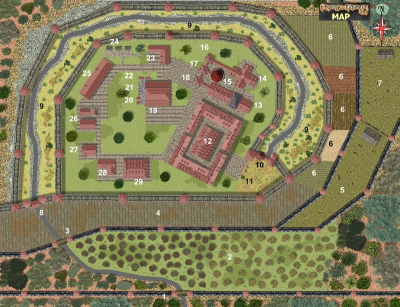 Date Added:
12/19/2011
Downloads:
1635
Description:
Our 42nd Jörðgarð (TM) Map of the Week takes us at last outside of the ruins of the Æsir Empire to one of its last surviving sites, the Vilji's Eye Fortress. It is the main outpost of the druids, rangers and magi of the Northern Circle south of the polar region. From a military standpoint, the fortress is as good as invincible. If it ever is conquered before that day in the distant future when the first useable cannons are invented, it will be only with the aid of powerful magic.

Key to the Map of Vilji's Eye

Vilji's Eye stands upon a high hill within the Greenwood in an area beyond the desolation that once was a part of the Southwood County in the Æsir Kingdom of Nægtaland. A separate wall surrounds the fortress at the base of each of the hill's three tiers of elevation. There is a fourth wall on the east side, with its longer but more gentle slope.

The only way to enter the fortress by land is with a road that goes through four well-defended gates, each made of oak wood a yard/meter thick and magically protected against fire. After the first gate, the road winds past the druids' fruit orchards, crossing their steep-sloped south slope vineyards between the second and third gates before entering the Outer Gauntlet. From this point on, the inner wall is doubled, and the road runs between its two flanks, climbing through grass and brush between the two defensive walls along the west, north and east sides of the fortress compound before reaching the Deathgate.

The road after this last gate runs through the Inner Gauntlet, a tunnel in an artificial hill with armed chambers on both sides and above the road. In these chambers, archers can fire arrows and crossbow bolts through embrasures while other warriors fire or pour boiling water and burning oil onto the intruders from above. There also are levers inside the fortification that will cause the road through the entire tunnel to collapse into a stone-floored pit 50 feet/15 m deep. After the floor has been collapsed, the enemy has no other military means of entry other than using ladders.

1. Applegate. The heavily-fortified gate is made of oak wood a yard/meter thick. Past the gate, the road runs along the west edge of the green druids' fruit orchards, with the Grænskógur continuing on the west side of the road.

2. Fruit Orchards of the green druids.

3. Winegate. This also is heavily-fortified gate made of oak wood a yard/meter thick. Past the gate, the road runs through the green druids' vineyards.

6. Crop and Grain Fields of the green druids.

7. Cow Pasture of the green druids.

8. Gauntlet Gate. This also is heavily-fortified gate made of oak wood a yard/meter thick. Past the gate, the road runs through the Outer Gauntlet.

12. Garrison. Occupied now by Bölðorn and his stone giant host.

13. Castle. Herjan and his administration use this building. However, many rooms now are empty. It was a governmental building when the fortress was fully manned. Herjan also has his quarters in the castle. In earlier times, court magi, wizards and sorcerers also were quartered in the castle.

15. Eye Tower. The huge tower, 50 feet/15 m in diameter and 100 feet/30 m high, is first and foremost the divination center of Vilji's Eye. Valgerður's Imperial Screen, the greatest magical item of divination ever created in the Æsir Empire is in the tower. The lower levels of the tower also can serve as a keep in times of war or siege. The tower has been ensorcelled to make it glow in a threatening orange light in the hours of darkness. Thus, by day or by night, it stands above the Grænskógur and can be seen from far away. Herjan ordered this ensorcellment to be worked, intending the tower to serve as a warning to the dark draugs and their minions that he and his followers are ready, able and willing to destroy them.

16.-18. Towers of the Magi. When Vilji's Eye was at its peak, it was home not only to its druids but also to many of King Vilji's magi, wizards and sorcerers. In addition, it often played host to traveling magicians in the king's service. The three towers were at their disposal. No. 16 served and still serves the white druids, No. 17 magi (except for diviners, who use the Eye Tower) and No. 18 wizards and sorcerers.

28. Smithy. This structure has been rebuilt with a ceiling 20 feet/6 m high, so that the smiths of the stone giants also can work here.

29. Quarters. The rangers and civilians of the fortress live in apartments in this four-story structure. Many of the apartments now are empty.

You can get the map in two versions:

1. The Fractal Mapper (TM) 8 map in FMP format, fully editable, from our Jörðgarð web page (79 MB). This option includes a 14-page PDF pamphlet that tells you how to use the maps in FM8.

Next week: The Death Gate and Inner Gauntlet of Vilji's Eye.