Log in to your NBOS account to upload files
Rating Submitted
Rating submission failed - please try again. If the problem continues, the feature may be broken.
All Categories > Fractal Mapper > Maps > Fantasy > Overland
Jörðgarð Map of the Week - #41 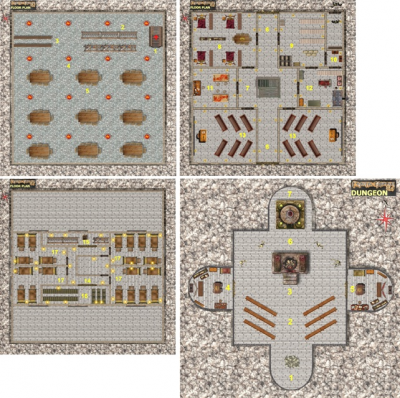 Date Added:
12/12/2011
Downloads:
1092
Description:
This week, with our 41st Jörðgarð (TM) Map of the Week, we end our look at the ruins of the Æsir Empire. We'll take our final look at the last of the eight dark draug settlements in the ruins of the fallen Æsir Empire, the ruins of Garndi's Crossing. Our focus this week is on the temple and monastery of the new religion of undeath that the ruling dark draug Mýsing is trying to establish. During the great wars, Mýsing, the baron of Garndi's Crossing, went over to the Darkness and allied with the high draug Martröð, who made of Mýsing one of the nine dark draugs. (A dark draug is similar to an OGL 3.5 lich.) As a result, Mýsing sacrificed his free will and bound it to that of the greater Darkness and Martröð. The high draug fell, but Mýsing still is a slave of the Darkness. He has no desire to turn from evil, but he hopes to regain his free will.

Thus, like Dr. Frankenstein in the book of the same name by 19th Century author Mary Shelley, Mýsing is convinced that he can use lightning to infuse life into a body that no longer is alive. His theory also is that - once he has this technique perfected - he can apply lightning to himself, to restore him from undeath to life. Then, he believes, he will be able to reclaim his own free will, because he no longer will be a draug. After that, he intends to have his followers make a god of him. The dungeons we look at today are the starting points toward that goal.

Key to the Dungeon Plan of the Temple of Rising Darkness

1. Entry with Skull Pile. The skulls of most victims of the sacrificial altar are stacked here.

3. Sacrificial Altar. The remains of sacrificial victims are thrown into the central basin until the next sacrificial ceremony.

6. The Watchers. That's the name given to the four non-animated skeletons between the two altars. These are skeletons of former sacrifice victims. They usually are harmless decorations, but they can be animated with black necromantic magic.

7. Blood Altar. The blood of sacrificial victims is kept here briefly, and still meaningless ceremonies are performed around it. When the temple is empty, red draugs claim the blood, preserve it and keep it in barrels for magical experimental work.


Key to the Dungeon Plan of the Monastery

This area has nothing to do with the monastery and is closed to the humans who use the ground and upper floors. Mýsing has a number of coerced intermediate draugs in his service. Unlike the dark draug and the red draugs and dark rider draugs who serve him, the intermediate draugs have no avatars; daylight destroys them.

When the intermediate draugs are in the ruins of Garndiskross, they must spend the daylight hours sheltered here in the cellar of the monastery, which is known as Draughall or Draughöll. Because the firepots burn constantly and there is no ventilation, carbon monoxide levels are high in the cellar. The fumes will slay living creatures that remain in the cellar with 1d4 hours.

1. Stairway from the Ground Floor.

4. Firepots to illuminate the cellar.

The monastery still is in its birthing stage. The faith that Mýsing is attempting to build is young and still has relatively few followers. The monastery was designed to be served by more clerics and and to train more novitiates than currently are available to it. As a result, the first floor still is underused.

7. Stairway to Barracks on the 2nd Story.

8. Teachers' Chamber. The chamber is intended to provide temporary quarters for visiting clerics from Slovania who come to the monastery to teach novitiates. At present, the chamber usually houses only one visiting cleric. To date, it never has housed more than two clerics at the same time.

10. Jakes and Draughöll Stairway. The jakes serve as the monastery's common facility. The small jakes chamber is cutoff completely from the stairway, which is off limits to members of the monastery. It is the stairway down to the Draughall or Draughöll, the cellar area where Mýsing's intermediate draugs shield themselves from daylight between sunset and sunrise.

11. School Laboratory. This training area used used to teach novitiates how to perform black necromantic work upon human bodies, both living and dead.

12. Kitchen. An enslaved human woman serves as the monastery's cook. She also lives in the kitchen, with a wall cot there upon which she sleeps.

13. Lecture Halls. The southeastern hall (right on the floor plan) has not been used yet.

You can get these map in two versions:

1. The two, original Fractal Mapper (TM) 8 dungeon planss in FMP format, fully editable, from our Jörðgarð web page (39 MB). This option includes a 16-page PDF pamphlet that tells you how to use the maps in FM8.

Next week: Outside of the ruins. The Æsir Vilji's Eye Fortress, built before the fall of the empire and still an important outpost of the Northern Circle.