Log in to your NBOS account to upload files
Rating Submitted
Rating submission failed - please try again. If the problem continues, the feature may be broken.
All Categories > Fractal Mapper > Maps > Fantasy > Overland
Jörðgarð Map of the Week - #40 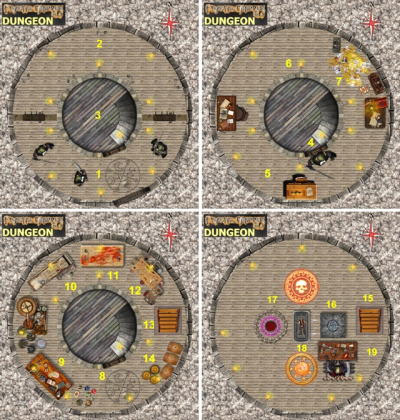 Date Added:
12/05/2011
Downloads:
1032
Description:
This week, with our 40th Jörðgarð (TM) Map of the Week, we continue looking at the last of the eight dark draug settlements in the ruins of the fallen Æsir Empire, the ruins of Garndi's Crossing. Our focus this week is on the tower of the ruling dark draug Mýsing. During the great wars, Mýsing, the baron of Garndi's Crossing, went over to the Darkness and allied with the high draug Martröð, who made of Mýsing one of the nine dark draugs. (A dark draug is similar to an OGL 3.5 lich.) As a result, Mýsing sacrificed his free will and bound it to that of the greater Darkness and Martröð. The high draug fell, but Mýsing still is a slave of the Darkness. He has no desire to turn from evil, but he hopes to regain his free will.

Thus, like Dr. Frankenstein in the book of the same name by 19th Century author Mary Shelley, Mýsing is convinced that he can use lightning to infuse life into a body that no longer is alive. His theory also is that - once he has this technique perfected - he can apply lightning to himself, to restore him from undeath to life. Then, he believes, he will be able to reclaim his own free will, because he no longer will be a draug. After that, he intends to have his followers make a god of him. The red draugs in the tower perform experiments and "interrogate" prisoners for the master, Mýsing.

Key to the Dungeon Plan of Mýsing's Tower

The second story is 30 feet/9 m above the ground floor. This makes the ceiling difficult to see from this level.

1. Entry. Immediately inside the door, a Circle of Endings is carved into the flower. It unleashes the spell Destruction upon living and Draug Destruction upon undead that cross the threshold. Three orc warriors always are on guard here.

2. Holding Area. Manacles embedded in the walls hold the prisoners in place. This area is used to hold prisoners who have been brought up from the cellar of the red draugs' tower to be used in Mýsing's experiments.

4. Entry. An orc warrior always is on guard here.

6. Reading Table. The books Mýsing most frequently consults are upon this large table.

7. Mýsing's Treasure. A large pile of old coins of the Æsir Empire, other objects of value and three chests make up the dark draug's treasure.

This floor is 10 feet/3 m above the second story. It is Mýsing's working laboratory.

8. Entry. Immediately inside the door is another Circle of Endings that has been carved into the flower. It unleashes the spell Destruction upon living and Draug Destruction upon undead that cross the threshold. No orc warriors are stationed above the second story.

9. Potion Distillery. There are three large objects in this area, staring from the top and going downward: A potion still, a laboratory table and a small table with scales, mortar and pestle and glass jugs and a ceramic urn filled with finished black necromantic potions.

10. Enshrouding Table. When prisoners have been in Mýsing's compound so long that their lives begin to yield to the life-destroying black necromantic aura that blankets the area, Mýsing has them slain and then uses magical potions to keep the corpses intact. After preparing the corpses with the potions, he enshrouds them here in magic-protected shrouds that keep parasites and fungus from destroying the bodies. They then are buried on the grounds of the complex until he has need for them.

11. Operating Table. Living prisoners who are subjected to Mýsing's experiments are manacled to the operating table, where the dark draug does his work.

12. Dissection Table. When experimenting, Mýsing dissects the parts of his victims' bodies here.

This floor is 10 feet/3 m above the third story. It is Mýsing's incarnation laboratory.

You can get these map in two versions:

1. The original Fractal Mapper (TM) 8 maps in FMP format, fully editable, from our Jörðgarð web page (13 MB). This version includes a 14-page PDF pamphlet that tells you how to use the map in FM8.

Next Week: Garndi's Crossing: The Temple of the Rising Darkness (The last map from the ruins of the Æsir Empire. New territory will follow.)