Log in to your NBOS account to upload files
Rating Submitted
Rating submission failed - please try again. If the problem continues, the feature may be broken.
All Categories > Fractal Mapper > Maps > Fantasy > Overland
Jörðgarð Map of the Week - #32 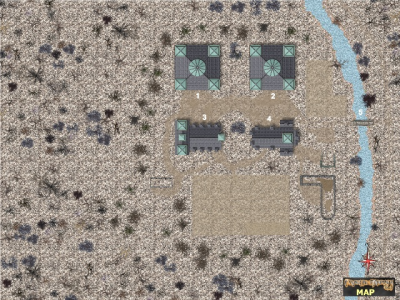 Date Added:
10/09/2011
Downloads:
1272
Description:
The 32d Jörðgarð (TM) Map-of-the-Week release shows what became of the the Æsir settlement of Lifehall (last week's map) after the devastation. In the Æsir Empire, Lifehall was the home of the living deities Löðr, a white necromancer, and Eir, a healer. They left Lifehall when they and the other Æsir deities abandoned Austamæraland and the empire to migrate to Miðgarð and Ásgarð. Today the settlement is the lifeless ruin Bonehall, the lair of the dark draugs Hrolf and þingúl.

After the dark draugs claimed the abandoned settlement of the Æsir deities, which already had fallen into partial ruin, they ordered their orcs to use materials from the outer buildings to restore the four main buildings. They then renamed Lifehall as Bonehall. With the presence of the dark draugs, all living things were destroyed in the Bonehall area, even marine life in Green Creek.

Key to the Map of Bonehall

1. Hrolf's Tower. The dark draug works and dwells in the tower. Only the uppermost floor has observation windows. The tower also has magical lab areas for the red draugs.

2. þingúl's Tower. The dark draug works and dwells in the tower. Only the uppermost floor has observation windows. The tower also has magical lab areas for the red draugs.

3. Orcs' Lair. The cellar levels are a dungeon prison for captured humans.

1. The original Fractal Mapper (TM) 8 map in FMP format, fully editable, from our Jörðgarð web page (22 MB). This version includes a 14-page PDF pamphlet that tells you how to use the map in FM8.