Log in to your NBOS account to upload files
Rating Submitted
Rating submission failed - please try again. If the problem continues, the feature may be broken.
All Categories > Fractal Mapper > Maps > Fantasy > Overland
Jörðgarð Map of the Week - #31 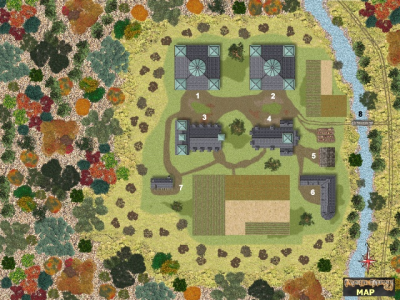 Date Added:
09/30/2011
Downloads:
1276
Description:
The coming Monday is a legal holiday here in Germany - the Day of German Unity, celebrating the unification of West and East Germany 22 years ago. That means that our offices will be closed on Monday, so I'm posting next week's Map of the Week ahead of time again instead of Monday, the usual release date.

The 31st Jörðgarð (TM) Map-of-the-Week release shows the Æsir settlement of Lifehall before the devastation. In the Æsir Empire, Lifehall was the home of the living deities Löðr, a white necromancer, and Eir, a healer. They left Lifehall when they and the other Æsir deities abandoned Austamæraland and the empire to migrate to Miðgarð and Ásgarð. Today the settlement is the lifeless ruin Bonehall, the lair of the dark draugs Hrolf and þingúl.

The god-king Óðinn (Odin) long has sought to win elven immortality for himself, the other Æsir deities who follow him and his folk. Such immortality continues to elude his Æsir in their new eastern home even to this day. As long as it remains beyond his grasp, however, Óðinn places great weight upon the work of his white necromancers and healers, who restore the health of the injured and who slow the demise of life wrought by time.

Although they play no great roles in the great tales and epic lióðr (songs) of the Æsir skáldar, the living deities Löðr and Eir long have been among those gods closest to Óðinn. Before Óðinn led his folk out of the still intact Æsir Empire and back to Miðgarð, Löðr and the goddess Eir made their base in the Easthills (Austhvoll) March of Austamæraland, in this settlement that they called Lifehall (Lífhöll). In their time there, Löðr and Eir trained that greatest white necromancers and healers in service to Óðinn's folk. Because knowledge of what once was on this site may be of use to some game masters, it has been included in the documentation of the fallen empire.

Key to the Map of Lifehall

1. Löðr's Tower. The god of white necromancy did his research and trained his more advanced students here.

3. Temple. The temple served both deities. Part of the upper level was a lab used to make healing potions and the like.

1. The original Fractal Mapper (TM) 8 map in FMP format, fully editable, from our Jörðgarð web page (64 MB). This version includes a 16-page PDF pamphlet that tells you how to use the map in FM8.