Log in to your NBOS account to upload files
Rating Submitted
Rating submission failed - please try again. If the problem continues, the feature may be broken.
All Categories > Fractal Mapper > Maps > Fantasy > Overland
Jörðgarð Map of the Week - #28 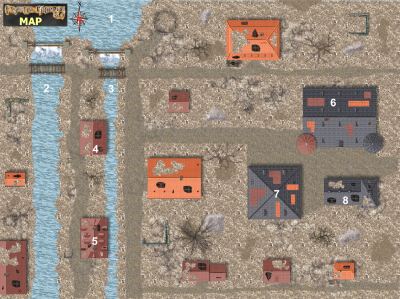 Date Added:
09/11/2011
Downloads:
1233
Description:
The 28th Jörðgarð (TM) Map-of-the-Week release shows shows us the ruins of the Austamæra town of Hagörð in the remains of the fallen Æsir Empire. Eight of the nine dark draugs (similar to OGL 3.5 Liches) dwell in the ruins of the empire. The dark draug Mumnir lairs in Hagörð. The last of the eight, Mýsing, and his lair will be detailed after Hagörð. As in the locations where the other dark draugs dwell, Hagörð is a lifeless village. Its trees are dead and only the brown waste of old plants and grasses cover the ground. Many buildings are ruins. When Mumnir came to the ghost town that had been Hagörð, only hollow shells remained of the three structures. Large holes were in the roofs, with the broken slate tiles scattered in the dying weeds that had grown in what had been the floors beneath the gaping openings they once covered. Mumnir ordered his orcs to cannibalize still intact lumber, lattices and clay roof tiles from other ruins and to restore the castle and the administrative building with them. He had no source of new construction materials. The coach house and stable building was of no use to the dark draug or his orcs. It remained untouched, allowed to continue to slowly crumble, like the rest of Hagörð.

Key to the Map of Hagörð

1. Millpond on the Hríð River.

8. Ruin of the coach house and stall.

1. The original Fractal Mapper (TM) 8 map in FMP format, fully editable, from our Jörðgarð web page (23 MB). This version includes a 14-page PDF pamphlet that tells you how to use the map in FM8.