Log in to your NBOS account to upload files
Rating Submitted
Rating submission failed - please try again. If the problem continues, the feature may be broken.
All Categories > Fractal Mapper > Maps > Fantasy > Overland
Jörðgarð Map of the Week - #27 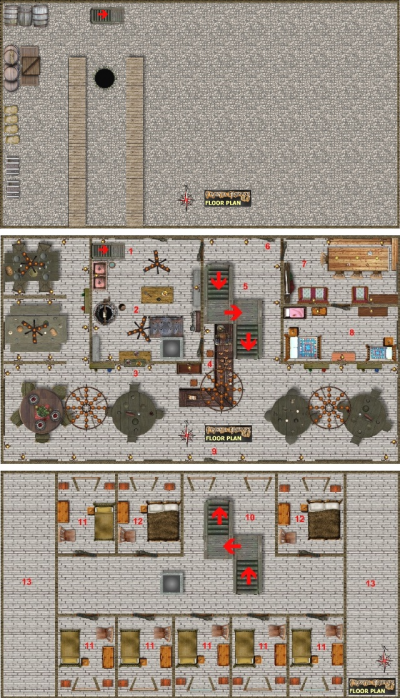 Date Added:
09/05/2011
Downloads:
1130
Description:
The 27th Jörðgarð (TM) Map-of-the-Week release shows the cellar and two floors of the North Crossing Inn in the ramshackle smugglers' settlement of North Crossing in the ruins of the Æsir Empire. The settlement itself was featured in last week's map.

The ruins of North Crossing were discovered by the Slavonian adventurer Jarmila and her band, who built ramshackle wooden structures in the ruins and established a trading post there. Unprincipled Slovanian traders had been making caravan runs up the Fjörm River Valley to the vampire-infested and -ruled Barrow Hills, but that trade had been growing unprofitable due to frequent raids upon the caravans by large hosts of renegade orcs pouring down from the Foggy Mountains in the west. Jarmila thought that she and her band could reap profits by taking control of the ruins of North Crossing and making a toll and services point of it. Her scheme has succeeded … to a certain extent.

Key to the Floor Plans of the North Crossing Inn

The stairway leads up to the inn's kitchen. The arrow shows the upward direction. The other items shown are barrels of Slovánski wine and stored food. The shelves also contain supplies for the kitchen. Between the shelves is the shaft of the kitchen well. The large empty area is rented as storage space. The game master should decide what is stored there at any given time.

1. Stairway to Cellar. The arrow shows the upward direction.

3. Service Window. When Oldřiška is finished with a guest's entrée, she places it through the window onto the shelf in the guest room, where Šimon or Otakar picks it up and brings it to the customer.

4. Tap Bar. This is where Šimon works, pouring drinks. The tap is not like a modern bar. It has no customer seating. It simply is the tap where beer and wine are poured into ceramic chalices and tankards. Šimon or Otakar bring the drinks to customers.

5. Stairway to the Upper Floor (Guest Rooms). The arrows show the upward direction.

7. Living Room of Šimon's Family. The room has a large table with chairs and corner bench, three large chairs, a cabinet and a coat rack.

8. Bedroom of Šimon's Family. The room has a double bed for Šimon and Oldřiška, a single bed for Otakar and a baby bed for Renáta, two dressers, a wardrobe and two night stands.

Because of the sloping roofs, the outer areas of the rooms have ceilings too low to be of real use. The small, double foot lockers in the guest rooms are about the only objects that will fit there.

10. Stairway to Ground Floor. The arrow shows the downward direction.

11. Single Rooms. Each room has a small wardrobe, a wooden chair, a bed stand, two small foot lockers, a single bed and a wooden chair.

12. Double Rooms. Each room has a small wardrobe, a wooden chair, a bed stand, two small foot lockers, a double bed and a wooden chair.

13. Crawl Spaces under Lower Roof Areas. These locked areas can be rented as storage spaces. The game master should determine whether they have content at any particular time.


You can get these floor plans in two versions:

1. The original Fractal Mapper (TM) 8 map in FMP format, fully editable, from our Jörðgarð web page (16 MB). This version includes a 16-page PDF pamphlet that tells you how to use the map in FM8.

Next Week: The ruins of Hagörð.