Log in to your NBOS account to upload files
Rating Submitted
Rating submission failed - please try again. If the problem continues, the feature may be broken.
All Categories > Fractal Mapper > Maps > Fantasy > Overland
Jörðgarð Map of the Week - #23 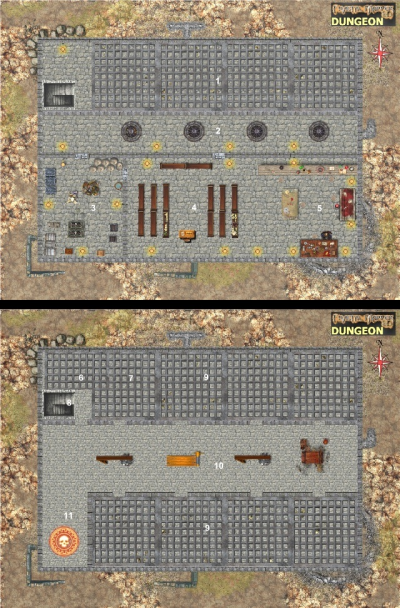 Date Added:
08/07/2011
Downloads:
1081
Description:
The 23rd Jörðgarð (TM) Map-of-the-Week release shows the dungeon levels of the ruins of the Æsir Empire village of Gárð's Crossing. There is little left of the village, as far as the eye can see at first. However, the dark draug Nárgul has his dungeon lair 100 feet/30 m beneath the surface. There are no physical paths to the dungeon levels. They can be reached only by magic.

However, there is a magical trap on the surface level that will whisk unwitting and unwilling adventurers from the surface into the dungeon. It is in the small half ring of stones in the upper left corner of the map (see last week's release). Anyone who ventures within this half ring of stones will be teleporterd automatically to the dungeon below.

You can get these two floor plans in two versions:

2. The original FM8 map in FMP format, fully editable, from our Jörðgarð web page (32 MB). This version includes PDF pamphlets that tell you how to use the layers that are built into the maps. PLEASE NOTE: This version also contains the surface level that comprises last week's map! You need download only once.

• 1. Cells for Experiment Candidates. Prisoners who were next in line for black necromantic experiments were kept in these cells. The bars of the cells are made of lead, to prevent magic-using prisoners from casting spalls into areas outside of their cells.

• 2. Gibbets. Some of Nargúl's experiments involved observing how prisoners died under various circumstances, usually as the result of his black necromantic magic. The bars of the gibbets are made of lead, to prevent magic-using prisoners from casting spells into areas outside of their gibbets.

• 3. Nargúl's Treasure Chamber. Nargúl should have a rich treasure. The game master should determine the chamber's precise contents, based upon the needs of his or her campaign.

• 4. Nargúl's Library. Most of the tomes should deal with black necromantic magic.

• 5. Nargúl's Workshop. This is where the dark draug does his magical research and experimenting.

• 6. Magical Teleport Circle. This is a one-way permanent teleportation circle. It teleports humans, half-elves and halflings who enter the trap on the surface into the dungeon. It will not teleport anything back to the surface.

• 7. Reception Cage. This cell includes the caged area over Location 6, the teleport circle. Prisoners are held here until Nargúl enters the dungeon and moves them to other cells. The bars of the cell are made of lead, to prevent magic-using prisoners from casting spells into areas outside of the cell.

• 9. Holding Cells. Prisoners are kept here until they are taken to their lives' final destination, the cells for victims of experiments on the upper level. The bars of the cells are made of lead, to prevent magic-using prisoners from casting spalls into areas outside of their cells.

• 10. Information Center. That's Nargúl's name for it. It's the torture chamber where Nargúl draws information from prisoners who are unwilling to give it.

• 11. Nargúl's Teleport Circle. This circle is attuned to transport anyone to a known surface location who speaks the trigger word, Endalausnótt (Endless Night).

PLEASE NOTE: Unfortunately, there were errors in last week's release of the FM8 FMP version. If you downloaded it before Sunday, August 7, please download again to get the corrected version!