Log in to your NBOS account to upload files
Rating Submitted
Rating submission failed - please try again. If the problem continues, the feature may be broken.
All Categories > Fractal Mapper > Maps > Fantasy > Overland
Jörðgarð Map of the Week - #22 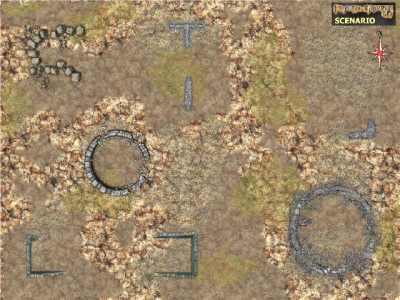 Date Added:
08/01/2011
Downloads:
1242
Description:
The 22nd Jörðgarð (TM) Map-of-the-Week release shows the surface level of the ruins of the Æsir Empire village of Gárð's Crossing. There is little left of the village, as far as the eye can see at first. However, the dark draug Nárgul has his dungeon lair 100 feet/30 m beneath the surface. There are no physical paths to the dungeon levels (next week's release). They can be reached only by magic.

2. The original FM8 map in FMP format, fully editable, from our Jörðgarð web page (18 MB). This version includes a PDF pamphlet that tells you how to use the layers that are built into the map. PLEASE NOTE: This version also contains the dungeon levels that comprise next weeks maps! You need download only once.

Next Week: Ruins of Gárð's Crossing, Map 2 - The Dungeon Levels