Log in to your NBOS account to upload files
Rating Submitted
Rating submission failed - please try again. If the problem continues, the feature may be broken.
All Categories > Fractal Mapper > Maps > Fantasy > Overland
Jörðgarð Map of the Week - #18 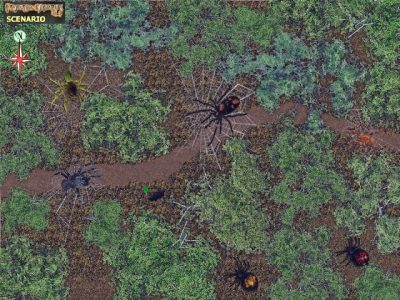 Date Added:
07/04/2011
Downloads:
1359
Description:
The 18th Jörðgarð (TM) Map-of-the-Week release shows the nighttime woodland lair of a herder draug and its six spider draugs. The swamp and lake area of the Æsir Empire Devastation (see the 12th release for Week 21) has become home to many creatures including these undead. In the Jörðgarð campaign setting, herder and spider draugs are the lowest level of undead of the Darkness. Both are being punished for not fulfilling the expectations that their dark master had of them. Spider draugs are undead human draugs that have been placed in spider form. Herder draugs are one step higher; they are human draugs who are compelled to command a group of herder draugs. Both are doomed to their fates until they fulfill whatever goal their dark master has set for them to redeem themselves. The habitat of both always is along trails through dark, isolated forest.

You can get the full-sized version of this map in two versions:

2. The original FM8 map in FMP format, fully editable, from our Jörðgarð web page (12 MB). This version includes a PDF pamphlet that tells you how to use the layers that are built into the map.

Next Week: A bugbear lair