Log in to your NBOS account to upload files
Rating Submitted
Rating submission failed - please try again. If the problem continues, the feature may be broken.
All Categories > Fractal Mapper > Maps > Fantasy > Overland
Jörðgarð Map of the Week - #12 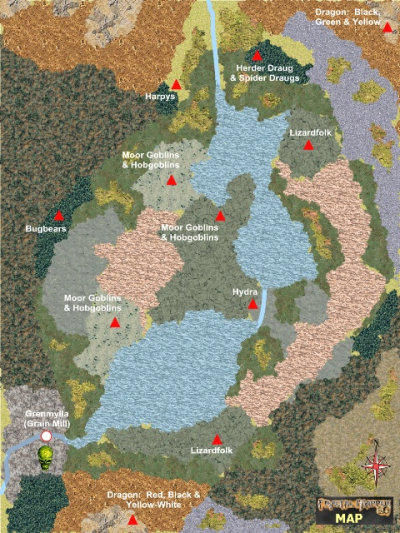 Date Added:
05/22/2011
Downloads:
1311
Description:
The 12th Map-of-the-Week release shows the post-devastation swamp and lake area of the fallen Æsir Empire. In the coming weeks, we'll be releasing individual maps of the many lairs shown on this week's overland map.

In the Jörðgarð (TM) campaign setting, a draug is very similar to a high-powered lich in such OGL 3.5 games as the Pathfinder (R) RPG, the True20 (TM) system or Dungeons & Dragons (R) 3.5. When the High Draug Martröð was destroyed at the end of the Great Wars, his destruction sent a devastating wave of magic across the fallen empire. Hardest hit was the central Leipt River Valley in the heart of what had been Greenwood Forest. The magic caused dry mountains to rise around the valley and the valley floor to sink. The forest vanished, and a line of inland lakes and swamps some 200 miles/320 km long covered what had been the forest floor.

The dark draug Svurumnir, whose lair we saw in the 10th and 11th Map-of-the-Week releases, is in Grain Mill (Grenmylla) in the southwest corner of the swamp and lake area. Many other creatures have settled within the area, including a red, black and yellow-white dragon named Yrsung in the south and a black, green and yellow dragon in the northwest.

You can get this map in any of three versions:

3. The original FM8 map in FMP format, fully editable, from our Jörðgarð web page (13 MB). This version includes a PDF pamphlet that tells you how to use the layers that are built into the map.

All three versions are released for personal and commercial use under the Open Game License Version 1.0a, which you can read on the Jörðgarð web site.

Next Week: The Dragon Yrsung's Lair