Log in to your NBOS account to upload files
Rating Submitted
Rating submission failed - please try again. If the problem continues, the feature may be broken.
All Categories > Fractal Mapper > Maps > Fantasy > Overland
Jörðgarð Map of the Week - #11 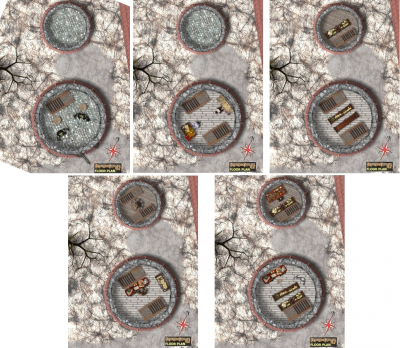 Date Added:
05/16/2011
Downloads:
890
Description:
The 10th and 11th Map-of-the-Week releases are dungeon plans for the lair of the dark draug Svurumnir. In the Jörðgarð (TM) campaign setting, a dark draug is very similar to a high-powered lich in such OGL 3.5 games as the Pathfinder (R) RPG, the True20 (TM) system or Dungeons & Dragons (R) 3.5.

Svurumnir's small dungeon consists of Svurumnir's tower, a tower for his red draug magi and a shabbily restored mill building that's the lair of the orcs who serve Svurumnir and his subservient reds draugs. Last week's release included an outdoor, top down view of the dungeon complex and the cellar, ground floor and upper floor views of the orc lair. This week's release offers the fivelevels of the two towers.

You can get the full-sized plans in any either of two versions:

Next Week: The Swamp and Lake Area of the Devastation