Log in to your NBOS account to upload files
Rating Submitted
Rating submission failed - please try again. If the problem continues, the feature may be broken.
All Categories > Fractal Mapper > Maps > Fantasy > Overland
Jörðgarð Map of the Week - #9 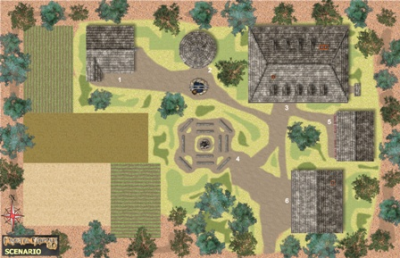 Date Added:
05/02/2011
Downloads:
2656
Description:
ABOUT THE ÆSIR:
We've received a number of queries about the kind of Æsir that are involved in the temperate and semi-tropical locations shown in these maps. Most knowledge of the Nordic Æsir comes from the old Icelandic Eddas. The Younger Edda relates how Óðinn (Odin), þórr (Thor) and other Nordic Æsir migrated from Ása in Asia Minor northward. The fallen Æsir Empire shown in maps here is the land from which Óðinn and his followers departed in Ása. Miðgarð and Ásgarð, where they ended their migration, still exist in the Jörðgarð campaign setting and will be detailed in forthcoming accessories.

The Great Wars ended in the destruction of the Æsir Empire, but neither side won. Most of the remaining Æsir and the enemy minions of the Darkness were slain or destroyed in the battles. Some powerful rangers and druids of the fallen Æsir banded together to form the Northern Circle, an organization that attempts to keep the surviving minions of the Darkness from taking control of the desolation. The ninth Jörðgarð (TM) map of the week shows the Æsir Draugs' Dread fortress, the last of three fortified outposts and groves of the Northern Circle. You can get it in any one of three versions:

3. The original FM8 map in FMP format, fully editable. Download it from our Jörðgarð web page (25 MB). This version includes a PDF pamphlet that tells you how to use the layers that are built into the map.

All three versions are released for personal and commercial use under the Open Game License Version 1.0a, which you can read on the Jörðgarð web site.