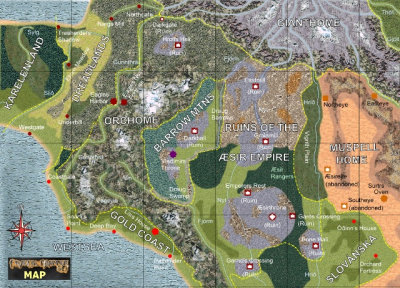 Date Added:
12/29/2009
Downloads:
1174
Description:
We've been receiving a number of questions from FM8 users who still are making vector maps in 1990s style and are confused about what FM8 can do on raster level, particularly with overland and city maps. You already can see some samples of village and city scenarios on the covers and the pages of the PDFs that accompany our symbol sets. We aren't at the point yet where we can release a sample city map, but we have done an alpha signoff on one overland map from the Jörðgarð (TM) campaign setting.

Before you read on, two cautions about this map:

1. It shows you some of what FM8 can do in overland raster mapping, but FM8 can in fact do much more than you see in these maps. Because we distribute our maps in open, editable format, we've kept our work relatively simple for game masters who may later want to modify it to suit their own campaigns.

2. Don't view this map at all as being sensible setting design in terms of adhering more or less to the rules of geology and nature in the real world. This really is something of a crazy map that makes little geological sense. Parts of the Jörðgarð setting are rooted in mythology, which also describes geological nonsense. The many strange rivers that flow down from the north are replications of some of the 11 great rivers of the world that flow down from Hvergelmir Spring atop the Upphaffjall Mountain in the mythological Eddaic description of the world. Members of the Cartographers Guild would tell you correctly that this map has "river violations" galore.

The heart of this map also shows the ruins of a great empire that was destroyed in wars in which magic of the highest levels was employed, adding more unnatural elements (i.e. violations). These Fallen Lands are recovering very slowly. Not even magic is more powerful than nature in the Jörðgarð setting. But much time will pass before these lands revert to their natural state.

As I've mentioned before, our project group is doing an extensive tutorial on raster mapping with FM8. I had hoped that we'd have it available by year's end, but life in the real world has gotten in the way of that goal. However, I think we'll be able to offer it (free and open, of course) by late January or in February.

The download link below will give you a flattened 1024 x 739 Pixel version of this map, if you want to look at it closer. Keep in mind that it's the start of what you can do with FM8 on raster level. It's not an ultimate result by any stretch of the imagination.

This map also is not an end product. As we go into the beta phase, additional changes probably will be made.
Copyright ©2021, NBOS Software. All rights reserved. 'Fractal Mapper', 'ScreenMonkey', 'Character Sketcher', 'Inspiration Pad Pro', 'Fractal World Explorer', 'Goblin API', 'AstroSynthesis', 'The Keep', and 'Skwyre' are trademarks of NBOS Software. Android is a trademark of Google Inc.