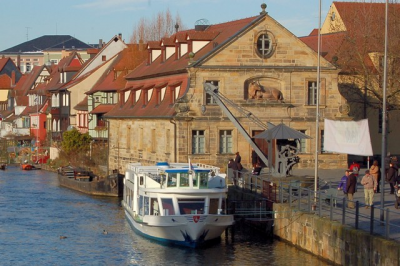 Recently, we released the Vintyri (TM) Symbol Set 2 which included external object symbols that could be placed near buildings. Some day, sometime we'll update that collection, and among the things it will include then are a small river crane and 12 smokehouses.

I suspect some of you might not know what an historical river crane looked like, so I've attached a photo of one that still stands as an historical monument on the Ludwig's Canal in Little Venice. It's in the Upper Franconian City of Bamberg in Northern Bavaria.

Smokehouses are small buildings that one used to find behind butcher shops, fish packing plants and the like, where meat, sausage and fish were smoked. No medieval butcher shop is complete without a smokehouse! From the existing externals collection also add a cord of firewood or two!