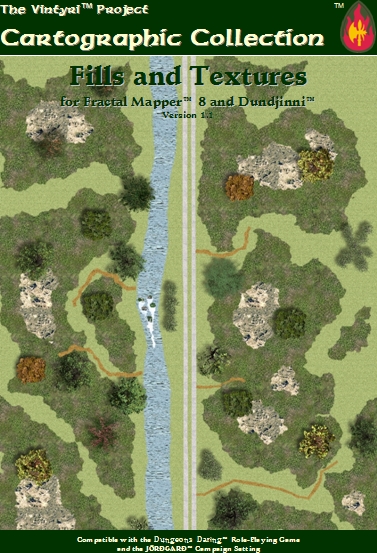 IMPORTANT: If you downloaded the Dungeons Daring™ fills or previous interim versions of these sets, we recommend that you erase them and replace them with this new release. These new sets include more fills and also improved versions of the old fills.

Overland is the largest set, with a wide variety of terrain and water fills for use in overland maps and in mapping cities, towns and other settlements.

Settlements is a very small set with various coal and marble fills useful in mapping towns and settlements as well as dungeons.

Structures offers a dirty metal fill for making eaves and all of the beaver tail clay tile and tarnished copper fills used to make the symbol sets in this Vintyri collection.

(The slate roof fill by Evil Empryss is available in the free CSUAC collection and the wooden shingle fill by Constantin Malkov is in a free art pack, both available at www.gmsapprentice.com/.)

This release is accompanied by a free 20-page PDF that you can download from the link below. The PDF tells you how to install the three fill style sets into FM8, and it includes color catalogs of the 128 fills.

As usual, this product is free and open, released under the Open Game License 1.0a. You can download the fills free at: