Log in to your NBOS account to upload files
Rating Submitted
Rating submission failed - please try again. If the problem continues, the feature may be broken.
All Categories > Fractal Mapper > Maps > Fantasy > Overland
A Town Smithy 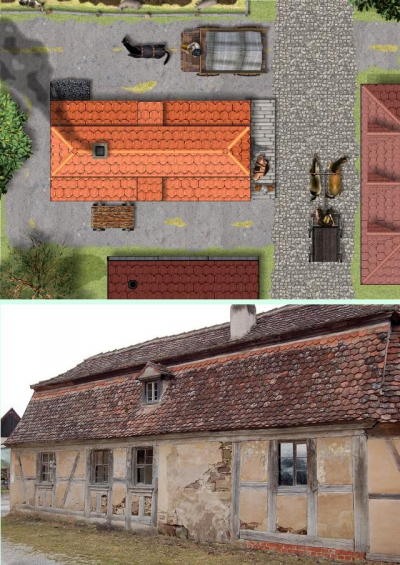 Date Added:
05/12/2009
Downloads:
1366
Description:
In our first look at smithies, we considered those that were found in villages and hamlets. No settlement can survive well without a blacksmith, but smaller hamlets don't have enough business to support a fulltime smithy. These artisans are farmers who also work at the smith's trade as a part-time occupation. Not even all towns could support a fulltime smithy, but those that were on important trade routes often had the luxury of having a fulltime, well-equipped smithy run by a master smith. Our example is the smithy that stood in the relatively small town of Westheim in Northern Bavarian Middle Franconia. The town was too small and too agriculturally-based to have been able to support such a smithy under normal circumstances, but the folk of Westheim had - in this case - the good fortune of being on a very important trade route connecting the imperial cities of Nuremberg and Windsheim (known today as Bad Windsheim). As a result, the road through Westheim was heavily traveled. Those passing between the two imperial cities supplied the smithy with considerable trade: Horses need to be shoed, metal fixings on wagons had to be fixed and, if there had been encounters with brigands under way, swords had to be repaired and sharpened. Remember that the division between weaponsmiths and blacksmiths that RPGs like to describe existed mostly in cities, garrisons and fortresses. Even then, only the nobility and military usually could afford to maintain a talented weaponsmith. Most commoners relied upon a blacksmith for their weapons. The Westheim smithy and farmhouse, was built in 1760 and restored in 1985 and 1986 in the Franconian Open Air Museum in Bad Windsheim, not far from the original site. The smithy remained in operation until the early 1980s. The upper picture shows our scenario with our symbol object based upon the original. Many of the other symbols are from the CSUAC, www.rpgmapshare.com and the user forums at www.dundjinni.com. The second picture shows the original. The smithy symbol is available in light and brown beaver tail clay tile and slate tile roofs. Unzip the ZIP file into your nbos\Mapper8\MapArt folder. It then will appear in your symbol menu.