Log in to your NBOS account to upload files
Rating Submitted
Rating submission failed - please try again. If the problem continues, the feature may be broken.
All Categories > Fractal Mapper > Maps > Fantasy > Overland
A Typical Mill 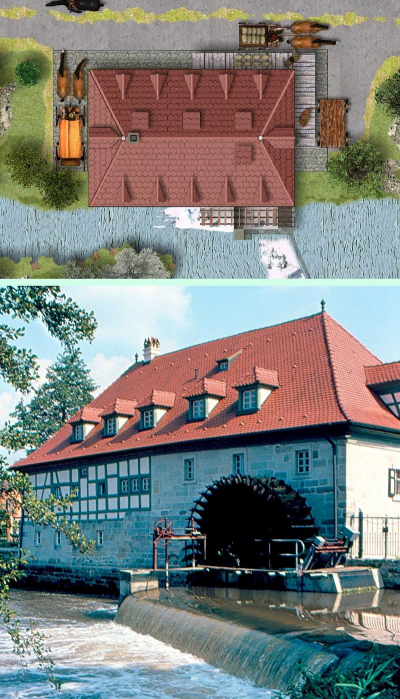 Date Added:
04/05/2009
Downloads:
1236
Description:
I'll start out by admitting that the name of this piece is something of a misnomer. There are about a dozen different kinds of mills that were typical a few hundred years ago, and similar variations on each of those kinds could be found a thousand times and more all over western and central Europe. Today's candidate is then one typical mill type. This time, we'll take a look at the Sterpersdorf Mill on the Aisch River. Sterpersdorf is a small farming village in Northern Bavarian Middle Franconia just upstream from the former county seat of Höchstadt an der Aisch (High City on the Aisch). The word "high" in the city's name had nothing to do with elevation. It designates instead that the city was an important regional governing center for the powerful prince bishops of Bamberg some 15 miles to the north. The prince bishop had a "Hochamt" (High Seat) in Höchstadt, which meant that there was a governing steward of the prince bishop there. The mill just upstream in Sterpersdorf was built and owned by the Hochamt as a grain mill, supplementing the castle mill on the river in the city. The master millers who worked there were employed by the steward. This explains why the mill is in a rather fancy building. The Hochamt did not build shanties for itself. However, this is typical too. The tales of millers who own their own mills and run them with wife and family date from a later time than that emulated in most fantasy RPGs. Such private mills usually date from the late 18th century and later, continuing well into the 20th century. Private mills were uncommon in the Dark and Middle Ages. In the early 19th century, Napoleon swept across Europe and enforced the secularization, which took the Roman Catholic church out of government and confiscated much of the church's property, turning it over to the lay nobility whom he supported. Thus, the Sterpersdorf mill was lost to the Hochamt and became the property of the counts of Höchstadt. Only in the 19th century did it go into private ownership. The Sterpersdorf mill is a good example of a bottom-driven mill that has a river with a reliable water flow. The Aisch never was considered to be a navigable river, so it could be dammed anywhere that was necessary. For the mill, the Aisch simply was dammed at the level needed to turn the waterwheel. The flow below the mill ran along both sides of a small island in the Aisch. Our map shows the mill pretty much as it probably looked in its busiest days. The loading platforms no longer are there, but we have seen some (not necessarily accurate) sketches showing them there in days of yore. The mill's waterwheel still turns today, but it no longer grinds flour and feed. The building now is a center for small conventions, business meetings, celebrations, chamber music concerts and art exhibits.

To download the mill symbol, use the link below. It is available for free and commercial use under the Open Game License 1.0a. Unzip it into your Mapper8 folder. Most of the other objects used are from the CSUAC, www.rpgmapshare.com and www.greytale.com .