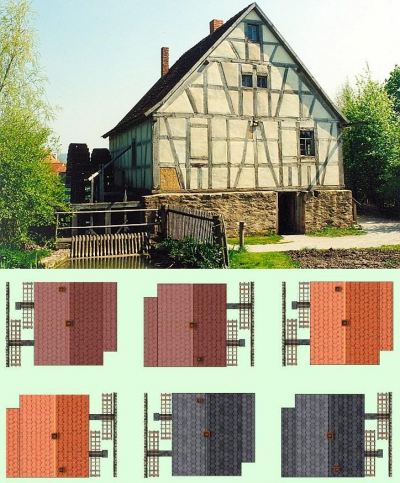 Date Added:
03/09/2009
Downloads:
1314
Description:
In my last entry, "Now you see it, now you don't," I used a mill symbol from the new free and open raster symbol collection that we're developing. The symbol is a replica of a genuine historical mill. It's interesting up front, because it's a small mill (40x30 feet) with two bottom-driven waterwheels. Its tale makes it even more interesting. The symbol is a replica of Flederich's Mill from the village of Koenigshofen in the Spessart Forest of northwestern Bavaria. The Spessart was one of the poorest regions of Bavaria, which led to its being filled with bands of brigands and bandits (an ideal RPG setting). Flederich's Mill started out as an oil mill. Its then single waterwheel powered a mill that pressed vegetable oil from grain seeds. In those days, vegetable oil had a much wider application than frying pans and salads. It also was used in tanning, as lamp oil, in the production of medicine, as a soap ingredient and as a lubricant. Despite that, the Spessart Forest was so poverty stricken that the oil mill couldn't pay for itself. For that reason, a grain mill also was packed into the crowded little building, and a second waterwheel was added to power it. In the 1980s, the mill, which was falling into a state of advanced ruin, was donated to the Franconian Open Air Museum (Fränkisches Freilandmuseum) in the Middle Franconian Imperial City of Bad Windsheim in Northern Bavaria. The mill was dismantled in 1986 and the parts were transported to the museum. Between 1988 and 1990, the mill was rebuilt and restored to operation on the museum grounds. The mini-map in my previous posting shows its current layout at the museum. We have six symbols available showing the mill with light clay, dark clay and slate roofs. Each roof style, in turn, is available in two different shadowings. The link below will give you three versions. The other three versions are in the download link with the posting "Now you see it, now you don't." To use these symbols, you need to unzip the downloads into your FM8 MapArt folder. You'll then find the mill symbols under Vintyri Collections in your FM8 symbol menu. These symbols are released under the Open Game License 1.0a and may be used in commercial and private maps.