Log in to your NBOS account to upload files
Rating Submitted
Rating submission failed - please try again. If the problem continues, the feature may be broken.
All Categories > AstroSynthesis > Plug-ins and tools
Traveller System Modifier 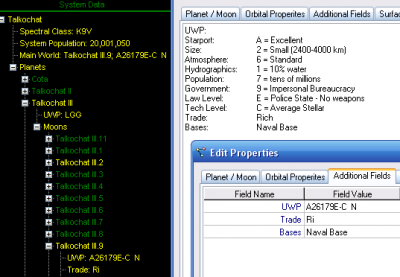 Date Added:
05/08/2008
Downloads:
2816
Description:
This plug in will generate a system's contents using the standard AS generator and then update to a Traveller UWP for all of the terrestrial, planetoid, and asteroid belt bodies in a system. The UWP's are generated according to the rules in Traveller Book 6 Scouts. The size of the planet generated by AS is used to generate Traveller atmosphere, hydrographics, population, government, law, tech level, bases/facilities and starport/spaceport. The main world in the system also has a list of trade codes defined.

The UWP is saved in a custom field ("UWP") so that it can be displayed in the System Data area. For gas giants this field contains the size of the gas giant, small or large. Bases ("bases") and Trade codes ("tradeCodes") are also saved in their own custom fields. Details of the UWP are placed in each planet/moon/asteroid belt's notes. The star systems have a custom property ("mainWorld") that contains the name and UWP of the main world in the system. Multiple star systems also have this property ("mainWorld") that contains the names of the main worlds for each star in the system.

The plug in will update all of the properties for the planes/moons/belts that have corresponding Traveller equivalents. This means that the Atm. Pressure, Atmosphere Notes, Atmosphere Components, Water Index, & Population properties are deleted or changed. As stated earlier, UWP details are appended to the Notes tab. No other properties are modified. The Radius(km) property is used to generate a world size code. The Mean Temp(K) and Habitability properties are used to determine if a world is in an Inner, Outer or Habitable zone which is used when calculating many of the Traveller world codes. Body types Terrestrial, Planetoid, and Asteroid Belt are considered 'Worlds' unless they orbit another 'World' or gas giant and then they are considered 'Satellites' for purposes of generating statistics. Stars in a multiple system are always treated as if they were at a 'Far' separation. No communication routes are added.

To use the plug in you just select all of the systems on the 3D map that you want to update before running the plug in. If the star doesn't have any contents then the standard generator is used to create them. Otherwise it uses the current contents.

Thanks to Brad Fletcher's Traveller UWP Generator plug in for the original idea and some code. I also borrowed some of James Vassilakos' Galactic methodology for main world generation. Traveller is copyright by and a trademark of Far Future Enterprises.
Copyright ©2021, NBOS Software. All rights reserved. 'Fractal Mapper', 'ScreenMonkey', 'Character Sketcher', 'Inspiration Pad Pro', 'Fractal World Explorer', 'Goblin API', 'AstroSynthesis', 'The Keep', and 'Skwyre' are trademarks of NBOS Software. Android is a trademark of Google Inc.