Log in to your NBOS account to upload files
Rating Submitted
Rating submission failed - please try again. If the problem continues, the feature may be broken.
All Categories > AstroSynthesis > Plug-ins and tools
Traveller UWP Generator 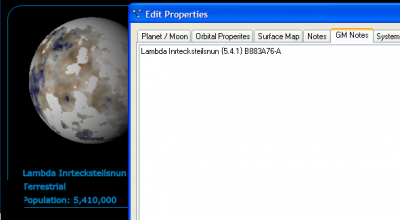 by Jay Gorrell, is definately better than my version. Please give it a try.

THIS WILL OVERWRITE ANY PREEXISTING GM NOTES
Use with care

This will generate a UWP string up to Tech Level for any terrestrial planet that has a population.

it will place this string in the GM Notes section under the properties of the planet.

I blatently lifted portions from the Complete Surface Map Generator Script. My thanks to it's author.

I plan on including the whole UWP(as it exists in TNE) soon. And creating a custom field to hold it instead of the GMNotes. This Alpha release is for feedback and suggestions.

The only changes to the UWP was substituting the normal hex location with {x.y.z}

also starport types are influenced by the planets population. You can change this via the Constants at the top of the script.

+EDIT: Populations should be determined correctly and now includes up to Trade Classifications.

++EDIT: Military Base Presence uses Imperial calculation instead of Non-Imperial. Scout waystations are determined by population size
{if Naval and Scout and population = Mature(10,000,000) then code is "B" otherwise code is "A"} Mature is a variable that can be set in the script.

Next Upgrade: use the percentage of atmospheric elements to determine atmosphere. Right now it only takes the atm pressure to determine type and skips over the possibility of the atmo being 'tainted' or 'exotic'. This will take some research(read: time)